Reduction of Dietary Sodium (Salt) and Sugars in Hong Kong

Hong Kong is facing the challenge of chronic non-communicable diseases (NCDs), such as cancer, heart diseases, stroke and diabetes, which are the major causes of death and accounted for nearly 60% of all registered deaths in 2013. Many NCDs are closely related to unhealthy diet, physical inactivity, smoking and excessive alcohol drinking. Foods high in sodium and sugars may negatively affect health when they make up a large proportion of our diet. This article discusses the reduction of dietary sodium (salt) and sugars in Hong Kong.

According to a survey conducted by the Census and Statistics Department in 2011, 34% of Hong Kong residents aged 55 and above had hypertension and the proportion increased to 46% for those aged 65 and above. Obesity is another health concern, the Behavioral Risk Factor Survey conducted by the Department of Health (DH) in 2012 revealed that 36.6% of the population aged 18-64 years were overweight or obese (BMI ≥23).

Excessive sodium intake is associated with increased risks of hypertension, stroke and cardiovascular disease (CVD); whereas excessive sugars intake, along with inadequate physical activity, resulting in energy imbalance may lead to overweight and obesity. Besides, high sugars intake may cause dental caries.

According to the World Health Organization, the population nutrient intake goal for sodium is less than 2000mg per day while that for free sugars is less than 10% of total energy requirement. 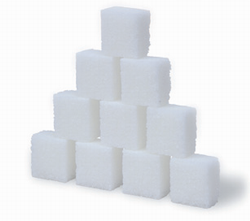 For a 2000 kcal-diet, free sugars shall contribute less than 10% of total energy, which is approximately 10 sugar cubes (weighs about 5g each).

Effort has been made to reduce the prevalence of NCDs and related behavioural risk factors. The Centre for Food Safety (CFS) has conducted risk assessment studies related to nutrients in food, implemented the Nutrition Labelling Scheme, and issued trade guidelines for sodium, sugars and fat reduction in foods. Besides, the DH also organises healthy eating promotion programmes, such as "EatSmart@restaurant.hk" and "EatSmart@school.hk", which encourage healthy eating through a setting-based approach.

To focus on the reduction of dietary sodium and sugars and learn from international successful experience, an International Advisory Panel (IAP) on Reduction of Dietary Sodium and Sugars in Hong Kong was established. In a recent meeting, five renowned experts from overseas and the Mainland shared their experience and provided expert advice on the overall strategy, programmes, target-setting and public health education strategy on reduction of sodium and sugars in Hong Kong. Relying on individuals' dietary change is one of the approaches to reduce dietary intake of sodium and sugars. Other than health education, IAP strongly suggests product reformulation that will benefit the society as a whole. Furthermore, active participation of non-governmental organisations and collaboration with the media are essential to support and monitor the change.

Consumers should be proactive and make positive changes in dietary habits, such as cutting down on high sodium/sugars processed food consumption by using nutrition label during purchase; ordering healthier options from the menu and requesting less salt/sugars used in food preparation when dining out; and reducing salt/sodium-containing seasonings and sugars added to food at the table. These actions will allow the taste buds to adapt gradually to the light-flavoured food.