Recently, a local newspaper reported that certain dried oyster samples purchased in Shenzhen and Hong Kong were found to contain cadmium ranged from 4.1 to 9.8 parts per million (ppm).

Cadmium is a metal that exists naturally in the earth's crust. It is also a pollutant caused by industrial activities like production of pigments, plastic stabilizers and nickel-cadmium batteries, electroplating and mining.

For the non-smoking general population, food is the main source of exposure. Although acute intoxication may damage gastrointestinal tract and affect liver function, such dietary exposure is very unlikely. Furthermore, the local study on dietary exposures to heavy metals of secondary school students suggested that the exposures for both average and high consumers were well below the Provisional Tolerable Weekly Intake of 7 micrograms per kilogram of body weight as established by the JECFA.

As for the above dried oysters, the cadmium levels, after taking the concentration effect caused by drying into account, do not exceed the local regulatory level of 2 ppm for oysters. Nevertheless, consumers should maintain a balanced diet so as to avoid excessive exposure to contaminants from a small range of food items. Indulged consumption of oysters should be avoided. 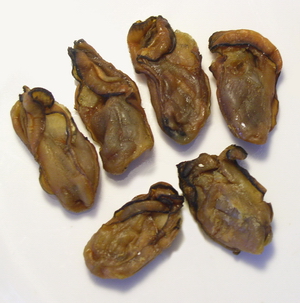