Recently, there have been media reports concerning the possible health implication of estragole in basil seeds which are consumed before meals for weight control purpose.

Basil is a herb. Its leaves have been commonly used for seasoning, and oils thereof can be used as flavouring agents in food. Its seeds become gelatinous when soaked in water and are used as an ingredient in Asian drinks and desserts, as well as thickening agent in Thailand. The leaves and seeds of basil have also been used as traditional medicine.

Estragole is a chemical naturally occurring in many common food plants including basil, bay leaf, fennel and star anise. It has been shown to cause liver tumours in animals. Based on the evaluations conducted by overseas authorities, the intake of estragole resulting from consumption of herbal medicinal products at recommended dosage and food containing estragole as a flavouring agent is considered not to pose a significant cancer risk.

Nevertheless, estragole is a potential genotoxic carcinogen and the resulting health risk upon consumption of basil seeds on a daily basis is not yet clear, the public is recommended to restrict their intake. 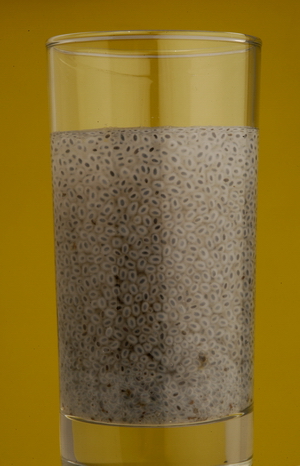