Sweetness adds to the pleasure of eating. In the era when consumers are striving to maintain a healthy body weight, the demand for low-calorie sweet-tasting food products is ever increasing.

The use of alternative sweeteners has been expanding during the past few decades. Besides being used as table-top sweeteners, they are now common ingredients in a wide range of food and beverages such as soft drinks, candies, chewing gum, yoghurt and desserts. 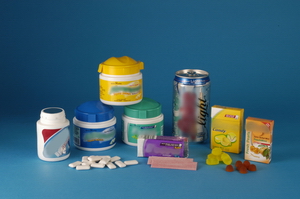 In a broader sense, sweeteners are substances that are used to impart a sweet taste with or without providing energy. Traditional sweeteners refer to sugars that exist in many forms, the most familiar of which is sucrose. Sugars are carbohydrates; they give out 4 kilocalories (kcal) per gram upon digestion and metabolism. On the other hand, sugar alcohols (also known as polyols or polyhydric alcohols) are also carbohydrates but they are not fully absorbed and metabolized by the body and in turn provide fewer calories per gram (typically range from 1.5 to 3.0 kcal per gram). Sugar alcohols are generally less sweet than sugars. Common examples include sorbitol, mannitol and xylitol.

Low-calorie sweeteners (e.g. aspartame, saccharin and acesulfame potassium) are also known as non-nutritive sweeteners because they have very little or no caloric values. They are substantially sweeter than sugars and can be applied at very low levels in foods to give enough sweetness, resulting in calorie-savings. For instance, 1 gram of aspartame (providing 4 kcal) can replace 200 grams of sucrose (providing 800 kcal).

In legal terms defined by the food legislation in Hong Kong, "sweetener" does not include any sugars or other carbohydrates or polyhydric alcohols. The following paragraphs will focus on low-calorie sweeteners.

Why Use Low-calorie Sweeteners?

Nowadays, a range of low-calorie sweeteners is available on the market. General information on a few commonly used ones is summarized in Table 1. Low-calorie sweeteners are often used in combination. Blending can produce a synergistic effect, it also facilitates the development of a taste profile that is most acceptable to consumers. For instance, aspartame, acesulfame potassium and cyclamic acid are often used in combination in low-calorie carbonated soft drinks.

Before low-calorie sweeteners are permitted for use in foods, they have been assessed by the Joint Food and Agriculture Organization/World Health Organization Expert Committee on Food Additives (JECFA) for safety, with corresponding Acceptable Daily Intakes (ADIs) allocated. The local studies on dietary exposure to selected low-calorie sweeteners from beverages and confectionary products, respectively, among secondary school students revealed that the exposures for both average and high consumers were below the respective ADIs as established by the JECFA.

There has been controversy over the safety of some low-calorie sweeteners. For example, there has been concern in the past that saccharin can cause bladder cancer in experimental animals. Many scientific authorities around the world including the International Agency for Research on Cancer re-evaluated saccharin in the 1990s and considered that the animal data which had raised questions about saccharin were not relevant to humans. Saccharin is permitted for food use in more than 100 countries to date.

Some special groups, however, should be aware of particular sweeteners like aspartame. Upon digestion, aspartame breaks down into amino acids phenylalanine and aspartic acid, as well as methanol. Individuals with phenylketonuria (PKU), a rare genetic disease in which the body cannot metabolize phenylalanine properly, should restrict phenylalanine intake from all dietary sources, including aspartame.

How are Sweeteners Regulated?

The Sweeteners in Food Regulations (Cap. 132U) stipulate eight types of low-calorie sweeteners currently permitted for food use in Hong Kong, namely acesulfame potassium, alitame, aspartame, aspartame-acesulfame salt, cyclamic acid (and sodium, potassium, calcium salts), saccharin (and sodium, potassium, calcium salts), sucralose and thaumatin. Starting from July 2007, the presence of food additives including sweeteners in prepackaged food available in Hong Kong must be listed by their functional classes and specific names or identification numbers on the food label.