In the last issue, we have introduced the long history of use of food colours and their origins. Now, let us explore the purposes as to why food colours are used in foods, their proper and inappropriate uses.

Colour, odour and flavour are intertwined criteria for determining the acceptability of food products in many cultures including Chinese. Consumers may reject a certain food simply based on the colour presentation of the food. A study conducted in the United Kingdom (UK) has shown that without restoring the colour lost during processing, canned peas with the greenish grey colour and strawberry jam with a dull brown colour were negatively received by consumers and the sales suffered accordingly. On the other hand, colour also influences consumers' taste perception. As indicated by another study, significantly less consumers could identify lime-flavoured sherbet correctly when it was coloured purple than when it was coloured green.

The use of colours in food not only enhances the visual appeal of the food, but also serves to match consumers' expectations. Without food colours, cola drink would not be brown, mint ice-cream would not be green, margarine would not be yellow, and rainbow candies would not be as colourful as consumers may expect them to be.

To make their food more appealing to consumers, food manufacturers use food colours to add or restore colours in foods. The main reasons for adding colours in mass food production include: (1) offsetting colour loss during processing or subsequent storage; (2) giving colour to those processed foods that would otherwise have little or no colour; (3) correcting natural and seasonal variations in food raw materials; and (4) supplementing the intensity of natural colour existing at levels weaker than those usually associated with a given food. 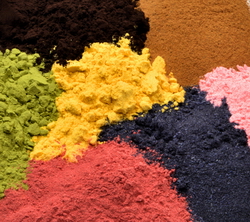 A variety of food colours

Proper Use of Food Colours

To ensure food safety, food manufacturers should use food colours that have been ascertained as safe for food use through safety evaluation. In addition, food colours should be used under conditions of good manufacturing practice which include, amongst others, limiting the quantity used in food to the lowest level necessary to accomplish the desired colouring effect.

Inappropriate Use of Food Colours

The use of food colours to disguise adulteration or to defraud consumers is unacceptable, anytime anywhere. A distant example of both dishonest and harmful ill-practice has been cited in the UK. In the eighteenth century, tea was kept at high prices in the UK when tea leaves were shipped all the way from China, and heavy taxation was imposed to this commodity. With a view to avoiding taxation and maximising profit, some unscrupulous traders in the UK sought to adulterated tea by mixing genuine tea leaves with those that had already been brewed and then dried. Poisonous colourants, such as copper arsenite and lead chromate with yellow-green and yellow colour respectively, were reported to be used to give a more convincing green tea colour.

Some other ill-practices which defraud consumers may not be inherently harmful. Chlorophylls copper complexes are colour additive with a dark green colour. It has been evaluated by international authority as safe for food use. There have been overseas reports of dishonest traders who made profit by mixing cheaper seed oils and/or olive oil with chlorophylls copper complexes, and deceptively selling them as high-value extra virgin olive oil which often appears green.

Locally in Hong Kong, the Centre for Food Safety has previously noted ill-practices which involved the use of colourants not approved for food use. For example, industrial Sudan red dyes had been detected in chilli powder and eggs. In these cases, Sudan red dyes were added to the chilli product to enhance its red colour, or they were added to poultry feeds which in turn enhanced the orange-red colour of the egg yolks, a characteristic sought-after by many consumers. Some studies indicate that these dyes may cause cancer in experimental animals. These dyes are not approved for use as food colour in many places, including Hong Kong.

In the next article, we will look into the safety concerns of food colours.