Recently, there were two incidents involving prepackaged food products that had been contaminated with excessive amount of Bacillus cereus. Affected products included bean milk and Chinese-style soup produced by two local food chains. This article discusses the risk of Bacillus cereus in processed food and the importance of temperature control.

Bacillus cereus and its Capability

Bacillus cereus is a spore-forming bacterium and grows best at 30°C to 37°C but stops growing at below 4°C. It is commonly found in the environment and a variety of raw foodstuffs such as fruits, vegetables and herbs but the level is generally too low to cause food poisoning. These foods usually contain less than 100 spores per gram, but higher amounts may be found in some herbs and spices. 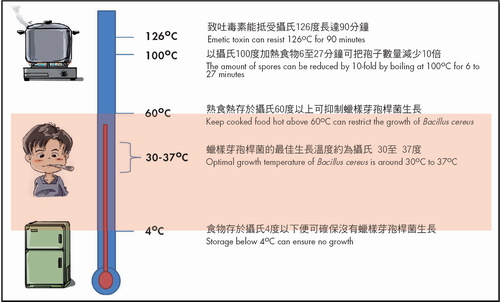 Temperature control to restrict the growth of Bacillus cereus

Since the toxin is heat-stable (can resist heating at 126°C for 90 minutes), once it is formed, it cannot be destroyed even the food is thoroughly reheated. Food poisoning caused by the toxin is characterised by vomiting within a short period of time after ingestion and has generally been associated with rice products as well as other starchy foods.

On the other hand, the bacterium can cause diarrhoeal type food poisoning which is due to the ingestion of food with large numbers of bacterial cells and/or spores that can produce enterotoxins in the small intestine. Food poisoning of this type is characterised by watery diarrhoea associated with abdominal pain, in which a wide variety of food including meats, milk, vegetables and fish have been implicated.

Temperature Control to Limit the Growth

In general, the presence of more than 100 000 cells of Bacillus cereus per gram of food can cause food poisoning; a simple way to prevent this tenacious bacterium is to limit its growth. Time and temperature control following heat treatment is of prime importance to prevent extensive Bacillus cereus growth and/or formation of emetic toxin. A rapid cooling process is required for heat treated food, followed by storage at refrigerator temperature. A set of standard cooling procedures should be established and the storage condition should be monitored. Alternatively, cooked food can be kept at above 60°C to restrict the growth of the bacterium.