On 7 October 2009 , the Centre for Food Safety (CFS) released its Food Safety Report for August. A sample of "Poon Choi" and a sample of soup vermicelli with pork satay were found to contain the pathogen Bacillus cereus at excessive levels of 2.5 million per gram and 810 000 per gram respectively, while the relevant limit is 100 000 per gram. The CFS has taken follow-up samples and warned the food premises concerned. In this article, we would discuss why Bacillus cereus was found in "Poon Choi" and the characteristics of this bacterium. 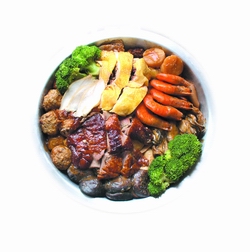 High amounts of Bacillus cereus found in "Poon Choi" are not uncommon. From 2006 to 2008, 4 (5%) out of 80 "Poon Choi" samples tested for Bacillus cereus were found unsatisfactory. However, mixed dishes like "Poon Choi" contain many ingredients and involve manual handling processes, pathogenic bacteria that were found to exceed relevant limits are not confined to Bacillus cereus. Two of the "Poon Choi" samples mentioned above had also been found to contain Clostridium perfringens and Staphylococcus aureus respectively exceeding relevant limits. Furthermore, Vibrio parahaemolyticus had been identified as a possible cause in a food poisoning outbreak affecting 480 people caused by consuming "Poon Choi" in 2006.

Bacillus cereus is ubiquitous in the environment. It is readily isolated from soil, cereal crops, and vegetables, etc. It has been reported that soil can contain approximately 1 000 to 100 000 spores per gram. Hence, it is not uncommon to find this bacterium in food, especially in raw agricultural products such as raw fruits and vegetables, raw herbs. These foods usually contain less than 100 spores per gram, but higher amount may be found in some herbs and spices.

There are two types of food poisoning caused by different toxins produced by Bacillus cereus. Emetic (cause vomiting) intoxication is caused by a heat-stable toxin (can resist 126°C for 90 minutes) pre-formed in food. Symptoms including nausea and vomiting occur in the first few hours after ingestion of incriminated food, followed by diarrhoea in some cases. Another type of poisoning is diarrhoeal, which is characterised by watery diarrhoea associated with abdominal pain. This type resembles the illness caused by Clostridium perfringens in which the toxins are produced in the intestine by ingested spores or vegetative cells. The illnesses of these two types of food poisoning are generally mild and persist no longer than 24 hours.

Pre-cooked food may create a favourable environment for Bacillus cereus to grow. Some ingredients of "Poon Choi" may be pre-cooked and reheated before serve. The ingredients, especially those agricultural products may contain spores. Heat of cooking can activate the spores to germinate into vegetative cells and kill other bacteria competing to grow with Bacillus cereus. If the food is left at room temperature for too long, the vegetative cells can multiply and produce the heat-stable toxin. Reheating the food can kill vegetative cells, but cannot eliminate the heat-stable toxin. Hence, it is important to store food properly, i.e. not leaving food at room temperature for too long, to prevent the formation of toxins. This can also prevent formation of heat-stable toxin by Staphylococcus aureus.

Although Bacillus cereus found in foodstuffs is not uncommon, presence of a small amount of the spores is usually not a concern, provided that the spores are not allowed to germinate and grow to a large number. In general, the presence of more than 100 000 cells of Bacillus cereus per gram of food is required to cause disease.