Food, Carcinogens and Cancer -- Part I

This is the first article in a series on the relation of food, carcinogens and cancer.

When talking about cancer, an image of long term suffering, excruciating therapies and high death toll may come up. These serious diseases therefore attract much public attention. This is not without reason, as in Hong Kong, the number of new cancer cases and cancer deaths has been substantially increased in the past few decades. One in four men and one in five women in Hong Kong developed some forms of cancer before 75 years old based on 2010 figures. The leading sites of cancer deaths were cancers of the lung, colon and rectum and liver.

Cancers refer to a large group of diseases that can affect every part of the body. They are also known as "malignant tumours" or "neoplasms" in scientific literatures.

Normal cells grow, divide and die in an orderly and controlled fashion. But for cancer cells, a single cell can grow out of control and form new abnormal cells which can then invade other tissues nearby or other parts of the body through bloodstream or lymph vessels in some cases.

DNA is the genetic material in cells and contains all the instructions and coding for all cell activities. When a cell survives with unrepaired or improperly repaired DNA damages, the cell may receive incorrect instructions and divide uncontrollably. The abnormality in DNA can be caused by mistakes during cell reproduction, inherited from our ancestors or damaged by factors in the environment we come into contact with. The carcinogens from the environment include:

You may notice that many of the carcinogens above may be very much part of everyday life for many people. For example, UV light from the sun, alcoholic drinks, ham or roast meat. It is unrealistic or impossible to live in a carcinogen free environment as some carcinogens can be avoided while many others cannot. 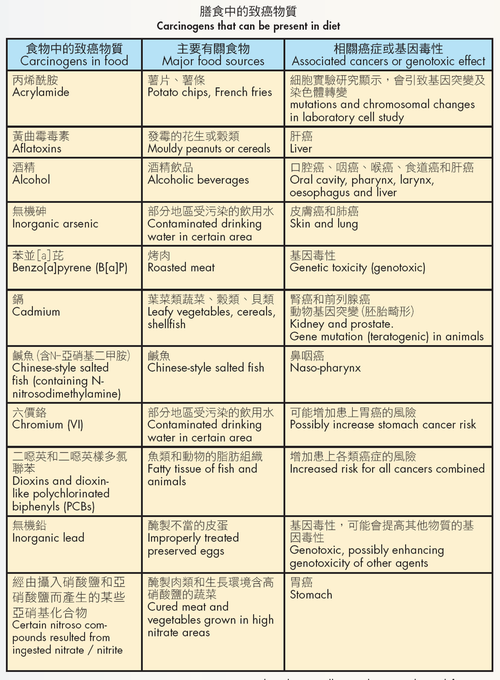 Sources of Carcinogens in Diet

As described in the table above, carcinogens in diet come from a wide range of food and many of the carcinogens like aflatoxins, dioxins, certain nitroso compounds resulted from ingestion of nitrate and nitrite cannot be avoided in its totality. It has been suggested that lifelong dietary patterns or dietary intake during specific life stages maybe important in inducing cancers.

We would talk about how to reduce cancer risk from food, and how carcinogens are systemically evaluated in the next issue.