In May 2014, the local media reported the results of a survey on heavy metals in vegetables including dried mushrooms and dried bamboo fungi available in the local market. According to the report, the cadmium levels in two dried mushrooms and one dried bamboo fungus exceeded the legal limits. The presence of heavy metals in food often arouses public concern. On the other hand, some people cast doubts on whether the detected levels of heavy metals in the dried vegetable samples can be compared with the legal limits directly.

What are the International Practices in Interpreting Maximum Permitted Concentrations for Heavy Metals in Dried Food?

Heavy metals are environmental contaminants, from both natural sources and human activities such as farming, industrial activities or car exhausts. Hence, they can occur as residues in food. Although the total amounts of heavy metals in food do not change upon drying, their levels will be concentrated.

The Codex Alimentarius Commission (Codex) has recommended that "in general...maximum levels should preferably be set for primary agricultural products and may be applied to processed, derived and multi-ingredient food by using appropriate conversion factors" to take into account the effect of processing. This approach has been adopted by many countries such as Australia and EU member states when interpreting laboratory results.

In line with the Codex's recommendation and international practice, the Centre for Food Safety (CFS) has been applying the concept of "conversion factors" when assessing whether the levels of heavy metals in a food have exceeded the legal limits.

How are the Levels Determined in a Processed Food?

The "original" level of a heavy metal in a dried processed food can be determined using the following formula: 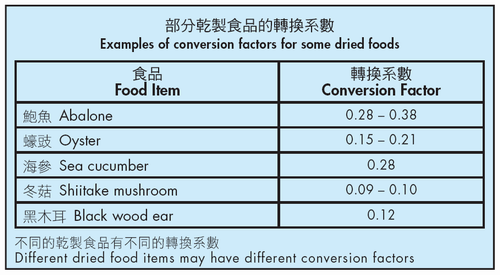 Can the Above Approach Ensure the Supply of Safe Food in Hong Kong?

Some people may confuse legal limits with the respective safety reference values such as the Tolerable Weekly Intake (TWI) established by the Joint Food and Agriculture Organization/World Health Organization Expert Committee on Food Additives (JECFA). The law states the amounts of chemicals allowed in different foods for enforcement and maintenance of food standards. Consuming food products with chemicals exceeding the legal standards does not imply that the consumer's health is at risk. When assessing the overall safety of the sample and the associated health effects of the heavy metals detected, both the level of the contaminant in the food and the quantity of the food consumed should be taken into account.

To ensure that food on sale in the market is safe and fit for human consumption, the CFS monitors food contaminants, including heavy metals, at import, wholesale and retail levels through the Food Surveillance Programme. In 2013, 768 vegetable samples were taken for heavy metals analysis, and only three samples were detected with levels exceeding the legal limits.