Sous vide is a French term meaning "under vacuum". As a culinary term, it refers to a m ethod of cooking under vacuum in sealed plastic pouches at exact temperatures (generally in the range of 47°C - 88°C; often done in a water bath to control the temperatures) for a relatively long period of time.

Sous vide sounds like a new cooking method but it has decades of history in France and other international marketplaces. In Hong Kong, sous vide food is not only available at food premises but can also be prepared at home.

The vacuum sealing of sous vide food allows heat to be efficiently transferred from water to the food and increases the shelf life of food by eliminating possible cross-contamination during storage. Sous vide foods are therefore suitable for retail sale or use in food service. Sous vide can also be used to prepare food with qualities that cannot be achieved by traditional cooking methods e.g. it inhibits off-flavours from oxidation and prevents evaporative losses of flavour volatiles and moisture during cooking. The precise temperature control also allows almost-perfect reproducibility (greater control over doneness) and makes tough cuts of meat tender.

Nevertheless, there are concerns over the microbiological safety of sous vide foods. Firstly, even the oxygen reduced environment suppresses the growth of spoilage bacteria, food held at temperature danger zone (4°C - 60°C) for prolonged period of time could allow pathogens like Clostridium perfringens to grow. The heat resistant Clostridium perfringens spores which survive during normal cooking can germinate and grow in vacuum packed food if the temperature control is inadequate. Secondly, for sous vide foods stored under refrigeration for extended periods, the anaerobic (absence of oxygen) and refrigerated conditions provide an opportunity for the growth of certain facultative anaerobes (bacteria which can grow either with or without oxygen) e.g. Listeria monocytogenes and anaerobes (bacteria which require the absence of oxygen) e.g. Clostridium botulinum. Last but not least, some sous vide recipes, especially for fish, result in food that remains undercooked that any pathogenic bacteria or parasites are likely to survive. 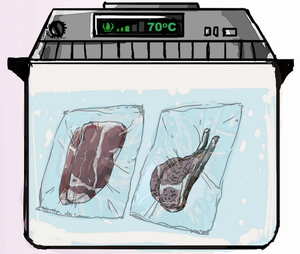 In addition, food grade plastic bags, certified as suitable for cooking by the manufacturer, should only be used for sous vide cooking.

Slow cooker is an electrical appliance which is designed to cook food at lower temperatures for several hours.

From the microbiological point of view, cooking food by using a slow cooker properly is safe as the direct heat from the pot, prolonged cooking etc. added to destroy microorganisms that may be present in the food.

Nevertheless, there had been food poisoning outbreaks associated with slow cooked beans as the cooking temperature was not high enough to destroy phytohaemagglutinin. This natural toxin is found in many bean species, among them the highest concentration is found in red kidney beans. So if one really wants to cook beans especially red kidney beans in a slow cooker, the beans should be soaked in water and cooked thoroughly at boiling temperature beforehand, or canned beans should be used instead.