On 18 April 2014, the US Centers for Disease Control and Prevention (CDC) announced its final investigation on a listeriosis outbreak which involved eight persons, including two mother-newborn pairs and a newborn, with one death in the US. Results of the investigation, with food (fresh cheese curd) and environmental samples tested positive for Listeria monocytogenes, indicated that cheese products made by Roos Foods were the likely source of the outbreak. This article discusses the risk of L. monocytogenes in cheese products.

Cheeses can generally be obtained by coagulating the protein of milk and by partially draining the whey resulting from the coagulation. Nowadays, over 500 types of cheeses are available worldwide, with variations deriving from different cheese manufacturing processes, e.g. type of milk, coagulation method, starting culture, addition of salt and ripening etc. 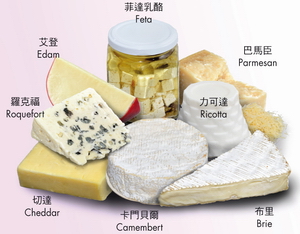 Various types of cheeses are available on the local market

In fact, there are various ways to categorise cheeses. Traditionally, cheeses have been classified principally by their moisture content-

Cheeses may also be grouped according to their principal ripening -

Ripened cheese - Not ready for consumption shortly after manufacture; must be held for such time, temperature and other conditions that results in the necessary biochemical and physical changes characterising the cheese, including -

Cheeses, particularly soft cheeses, have been implicated in listeriosis outbreaks worldwide. Foodborne listeriosis is a relatively uncommon but serious disease caused by L. monocytogenes, a pathogen that can be killed under normal cooking temperature but is able to grow slowly at refrigerated temperature as low as 0°C. Asymptomatic infection of listeriosis probably occurs in most healthy people, but it can pose serious health risks for the susceptible population including pregnant women, elderly and immunocompromised individuals such as patients with AIDS and diabetes mellitus.

The presence of L. monocytogenes in cheeses may be originated from the ingredients particularly raw milk or can come from the processing plant environment, including the equipment, personnel or cross-contamination between finished products and raw materials. If the temperature as well as other conditions especially acidity and water content permit, L. monocytogenes can grow to high levels upon prolonged storage.

Cheeses of Higher or Lower Risk

Since pasteurisation, by heating milk to a specific temperature for a set period of time, kills L. monocytogenes effectively, cheeses made with pasteurised milk are generally considered of lower risk unless post-process contamination occurs.

For cheeses made with unpasteurised milk, their safety relies on a range of factors that influence the presence, growth, survival and inactivation of pathogenic microorganisms including L. monocytogenes.

In general, soft cheeses made with unpasteurised milk are of much higher L. monocytogenes risk than hard/ extra hard cheeses made with unpasteurised milk as the formers are likely to be less acidic and contain more moisture, which provide a favourable environment for the growth of L. monocytogenes, than the latter. A recent risk assessment study conducted by Food Standards Australia New Zealand also pointed out that the estimated L. monocytogenes risk from the consumption of certain raw milk soft cheeses i.e. feta and camembert is low in the general population but is high in the susceptible population. However, the L. monocytogenes risk upon the consumption of raw milk cheddar cheese (a type of hard cheese) and extra hard cheese in the general and susceptible populations is negligible and low/ very low respectively.