The use of electric cooking appliances makes the preparation of delicacy much simpler and is embraced by many Hongkongers. After talking about different cooking methods in past issues, the main characters in this issue are microwave ovens and halogen ovens (the latter one also called halogen convection ovens or turbo cookers/ovens) which employ different types of electromagnetic (EM) waves, namely microwaves and infrared waves respectively, for cooking.

The Waves for Cooking

EM waves are waves of electrical and magnetic energy moving together through space. There are different types of EM waves with different wavelengths in which energy transferred increases as the wavelength shortens. Moving along the spectrum of EM waves, microwaves and infrared waves have longer wavelengths, hence are of relatively lower energy, than gamma rays and X-rays. Microwaves and infrared waves can heat up food but does not make food "radioactive". The waves cause vigorous vibration of molecules in food resulting in high temperature that cooks the food. Apart from releasing infrared waves, halogen bulb also heats up the air in the chamber of halogen ovens, which helps the food get brown and crispy surface. On the contrary, microwaves do not heat up the air in the oven. 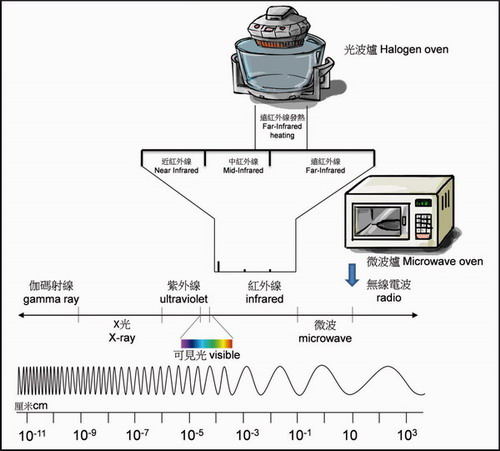 Using halogen oven to cook food is also a type of dry-heat cooking, process contaminants can be formed at high temperatures in a similar way as cooking using pan, electric grill, or conventional oven. The high temperature (usually well above 100°C) can cause chemical changes in the major components in food (i.e. carbohydrates, fats and proteins) and subsequently generate process contaminants, such as acrylamide, polycyclic aromatic hydrocarbons (PAHs) and heterocyclic amines. With regards to the risk of PAHs, halogen oven is a relatively safer choice than charcoal grilling for making barbecued food, as it does not expose food to smoke and direct contact with flame. However, indulgence in barbecued food should be avoided.

You need to turn over a steak when pan-fry it on stove; it is the same for cooking with electric appliances. Microwaves generated are not uniformly distributed inside the cooking cavity of microwave oven, which leads to uneven heating of food. The rate of microwave heating also depends on the moisture content, shape, volume and mass of food present. Since food can be of irregular shapes or variations in thickness, the uneven heating process may produce food items with hot and cold spots, which in turn may give rise to microbiological food safety concern. Hence, it is recommended to stir, rotate or turn food upside down midway through the cooking process for uniform heating. Food that cannot be stirred can be left to stand for a few minutes after turning off the oven, giving time for the heat to penetrate more evenly throughout.

Below are some tips on cooking with these electric cooking appliances: