Toxins in Our Honey?

This article is the second in a series of three articles on natural toxins in food.

Honey is the sugary liquid produced by bees mainly from nectars in flowers and to a lesser extent, honeydew from sap-sucking insects. Because of the sweetness and distinctive aroma, honey has been prized since antiquity.

As honey bees can forage up to five kilometres from the hives, the honey they produced often originates from wide varieties of plants, sometimes including poisonous plants. If the density of flowering poisonous plants or in certain cases, honeydew from insects that feed on poisonous plants is high during a particular period, the honey may accumulate significant amount of natural toxins. In this article, we will give a brief introduction on three of the better-known natural toxins that may be found in honey.

Grayanotoxins is a natural toxin best known to be produced by rhododendrons. The toxins exist in flowers, leaves and twigs of plants of the Ericaceae family. Grayanotoxin poisoning is usually caused by the consumption of grayanotoxins-contaminated honey which is often bitter. Such food poisoning cases are sometimes called "mad honey poisoning", where symptoms like dizziness, weakness, excessive perspiration, excessive salivation, numbing of limbs, nausea develop quickly after consumption.

Grayanotoxin poisoning is well-known in the Black Sea area of Turkey. It is caused by a high concentration of rhododendron flowers in that area in certain time of the year, and it may be difficult for the small-scale beekeepers there to blend the rhododendron honey with non-toxic ones in order to dilute the level of toxins. Grayanotoxin poisoning has also been reported in other countries, and self-imported honey has been involved in certain cases in recent years.

Pyrrolizidine alkaloids (PAs) are a large group of natural toxins that are found in large number of plants all around the world. There are over 500 different types of PAs and are reportedly found in over 6 000 plant species in several families of plants. The main concerns of PAs, especially 1,2-unsaturated PAs, are their chronic effect on livers. They can cause veno-occlusive disease on the liver, where in acute cases can lead to death in two weeks.

Although PAs are sometimes found in honey, their health risk to humans is more often associated with herbal medicines or PA-containing weeds in cereal grains. On the other hand, the level of PAs in honey can be higher especially in honey harvested from a single type of flower that is known to contain PAs. PA-containing honey generally cannot be distinguished by taste.

Tutin is a natural toxin unique to the tutu plants that are endemic to certain parts of New Zealand. Tutin is found in the honeydew produced by the insect passion vine hoppers that feed on tutu saps. However, tutin is not found in the tutu nectar. When the bees gather enough tutin-containing honeydew to make honey, the honey can become toxic as a result. 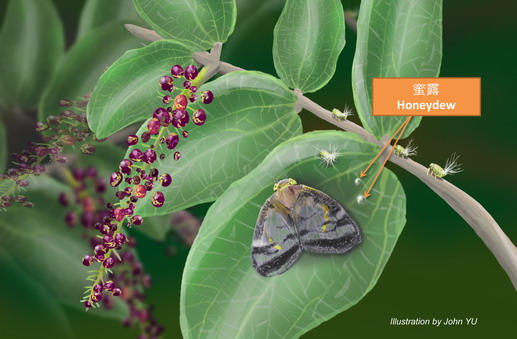 When passion vine hoppers (white: nymph, black: adult) eat the sap of the tutu plant, the tutin toxin and the sugars in the undigested sap is excreted as honeydew onto the leaves. Bees, after collecting the honeydew, will produce toxic honey.

Tutin and its derivative are very toxic to human and can cause vomiting, delirium, giddiness, increased excitability, stupor coma and violent convulsions. Death by consuming tutu-contaminated honey has also been reported in the past.

Because tutin poisoning is serious and the limited distribution of the tutu plant, maximum regulatory levels have been set in New Zealand for honey and honey combs. Products that exceed the limits are not allowed to be sold or exported, and that beekeepers and packers are required to comply with these standards.

With good understanding of plant in the environ around the hives by beekeepers and blending of honey from different sources by packers to achieve a dilution effect if toxic substances are present, honey can be enjoyed without issues. However, infants under one year old should not consume honey as their digestive systems are not fully developed and will be at risk of contracting botulism. Since honey mainly contains free sugars like fructose and glucose, and sugars provide energy for the body but have no other nutritional value, excessive intake of honey should be avoided.