Reduction of Trans Fat in Foods

Last month, the US Food and Drug Administration (FDA) announced its preliminary determination that partially hydrogenated oils (PHOs), the primary dietary source of artificial trans fatty acids (TFA) in processed foods, are not "generally recognized as safe" for use in foods. The announcement has revived interest over the regulatory control of TFA level in foods. This article discusses the actions on TFA in different countries and places.

What is the Significance of the Determination?

If the determination is finalised, this would mean that food manufacturers would no longer be permitted to sell PHOs, either directly or as ingredients in another food product, without US FDA's prior approval for use as a food additive. The US FDA has opened a 60-day period for public consultation on the determination.

TFA are unsaturated fat that are mainly formed during the partial hydrogenation of vegetable oils for producing the semi-solid and solid fats that are widely used in food products (e.g. margarines, pastries). Hydrogenation is the process by which hydrogen atoms are added to unsaturated sites on the carbon chains of fatty acids. In principle, fully hydrogenated oil should contain no TFA since all the fatty acids will be saturated. TFA are also present naturally in milk and fats of sheep and cattle but only at low levels.

TFA can increase the risk of coronary heart disease by not only raising the level of low density lipoprotein cholesterol (the harmful cholesterol), but also reducing the high density lipoprotein cholesterol (the beneficial cholesterol). The World Health Organization (WHO) and the Food and Agriculture Organization of the United Nations have recommended that diets should provide a very low intake of TFA, in practice, this implies an intake of less than 1% of daily energy intake. Nonetheless, the WHO is reviewing the current recommendation to further lower the population intake of TFA. In addition, the US Institute of Medicine has recommended that TFA intakes should be kept as low as possible while consuming a nutritionally adequate diet.

Actions on TFA in Overseas Countries

Some food/health authorities have called for actions on TFA, which are generally classified into labelling of TFA and limiting the amount of TFA in foods. Several countries/places such as Canada, the USA and Taiwan require mandatory nutrition labels with TFA declared. In Australia, New Zealand and Malaysia, although nutrition labelling is mandatory, TFA declaration is required only if a nutrition claim is made in respect of fatty acids and other nutrients. 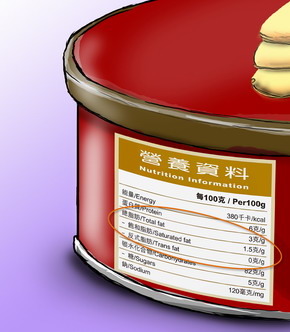 Some food/health authorities attempt to restrict the use of TFA in various types of food products at different levels. For example, New York City in the USA prohibits food containing partially hydrogenated vegetable oils, shortenings or margarines with more than 0.5g TFA per serving to be stored, used, or served by food service establishments. In Singapore, it requires all pre-packed edible fats and oils to contain no more than 2g TFA per 100g product. However, at present, banning of TFA in food is not imposed by any countries/places and there is no international consensus on the restriction of TFA.

Hong Kong is one of the first few places in the world that requires the declaration of TFA content on nutrition labels. The Centre for Food Safety (CFS) has also formulated guidelines to encourage the trade to reduce TFA level in foods and, at the same time, conducted a series of studies to track the TFA contents in local foods. The latest study revealed that there has been a large reduction in the average TFA contents (27-70% reduction) in four food categories that had been found in previous studies to contain relatively higher levels of TFA (i.e. cakes; egg tart, pie and pastry; bread; and other bakery products), reflecting the positive effect of the trade in reducing TFA level in their products. The CFS will continue to monitor the international development and keep working with the food trade to further lower the TFA level in foods.

Concern on Replacement of TFA with Saturated Fatty Acids (SFA)

The announcement from the US FDA has also aroused the concern on the replacement of TFA with oil high in SFA (e.g. palm oil, coconut oil) in foods. SFA can increase the risk of developing heart diseases by raising the level of low density lipoprotein cholesterol. From our latest study, it was noted that the TFA contents in some individual samples have reduced dramatically whilst a similar SFA contents have been maintained, reflecting that the reduction in TFA without raising the SFA contents in foods is practically feasible.