Toxins in Our Fruits and Vegetables?

This article is the first in a series of three articles on natural toxins in food.

Fruits and vegetables constitute an important part of a healthy diet. However, certain common fruits and vegetables contain a number of naturally occurring toxins that are often produced to protect the plants from fungi, insects and predators. Various cooking and preparation methods can help reduce the toxins to a lower level and render them safe for human consumption. 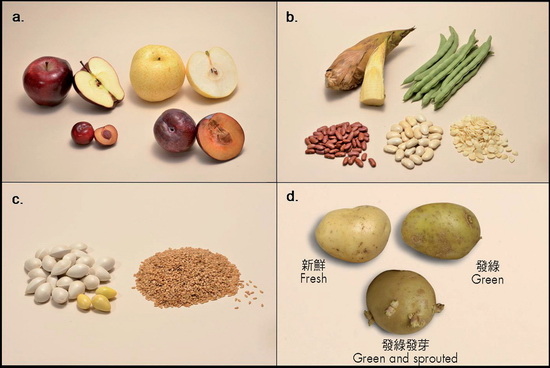 Various fruits and vegetables that contain natural toxins can be rendered safe for consumption by removing toxic parts (a), thorough cooking (b) and restricting consumption (c). Sprouted or green potatoes should not be consumed (d).

In certain food, the natural toxins are concentrated only in particular parts. Removal of these toxic parts can render the food free from the toxins. For example, the cyanogenic glycoside in apples and pears are found in the seeds, where toxic hydrogen cyanide can be released during chewing or digestion. By avoiding the seeds or removing them before making juice and puree, the products will be free of cyanide. This is especially important for young children who are more sensitive to cyanide. Similarly, the seeds of stone fruits like apricots, plums, prunes, peaches and cherries should not be consumed.

For green, sprouted or damaged potatoes, the level of the natural toxin glycoalkaloids will increase significantly compared with the low levels in non-green ones. Glycoalkaloids are concentrated in or near the sprouts, green and damaged areas. They will impart a bitter taste to the food. It is best to discard the whole potato that is green, sprouted or damaged as it is not easy to judge how much of the parts below the peels or near the sprouts to remove in order to render the potato safe. And cooking cannot destroy glycoalkaloids. Potatoes should be stored in cool dark places to prevent them from turning green or sprouting and produce glycoalkaloids.

Lectin is a natural toxin that is commonly found in raw green beans, red kidney beans, white kidney beans, etc. To safely consume these vegetables, the dried beans should be soaked thoroughly and that both the fresh and dried ones should be cooked thoroughly at boiling temperature to destroy the lectin present. Raw or undercooked beans should be avoided. Canned beans had undergone high heat treatment during production and therefore the lectin is destroyed.

For flaxseeds, some recipes only require dry heat treatment (e.g. in bakery products), the cyanogenic glycoside content could not be reduced as effectively as in moist heat cooking (e.g. boiling). In this sense, flaxseeds should be consumed in moderation.

The seeds of Ginkgo biloba, a food traditionally consumed in China and other Southeast Asian countries, contain a natural toxin called 4'-methoxypyridoxine (4'-MPN). Although 4'-MPN is a heat stable substance that cannot be inactivated by cooking, boiling of ginkgo seeds are still advised as boiling can destroy other natural toxins present. Consumption of gingko seeds should be limited to a few pieces each time.

With the proper knowledge and handling procedures, many vegetables and fruits can be enjoyed as important components of a balanced diet without much issue.