This article reviews the food poisoning outbreaks related to food premises and food business in year 2012 in Hong Kong.

The Centre for Food Safety (CFS) is responsible for the investigation and control of food poisoning outbreaks related to food premises and food business. In year 2012, the CFS received 341 referrals from the Department of Health (DH) on suspected food poisoning outbreaks that affected a total of 1 304 persons. The numbers have increased as compared with 290 outbreaks with 1 036 persons affected in 2011 (Figure 1).

Figure 1. Number of food poisoning outbreaks related to food premises and food business and the corresponding number of persons affected from 2006 to 2012.

Bacteria was the most common (over 80%) group of causative agents of the outbreaks in 2012. Vibrio parahaemolyticus was the commonest causative organism, accounting for 137 outbreaks (40%) with 482 persons (37%) affected. A substantial increase was noted in the number of persons affected (436 persons, 33%) in 66 outbreaks (19%) related to Clostridium perfringens and norovirus (see Table). Two clusters of outbreaks suspected to be caused by these two microorganisms drew special attention in 2012.

Improper holding temperature, cross contamination by raw food and consumption of contaminated raw food were the top three contributory factors accounted for the outbreaks in 2012.

Table: The causative agents of food poisoning outbreaks related to food premises and food business in 2011 and 2012 (in descending order of number of persons affected) 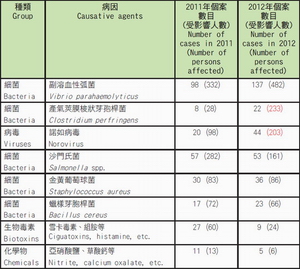 Clostridium perfringens is a spore-forming rod shape bacterium usually present in raw meat and poultry. Outbreaks of Clostridium perfringens often happen in food premises where food is prepared in large quantities and kept under inappropriate holding temperature for a prolonged period. Preventive measures depend on limiting the proliferation of the bacteria by cooking food thoroughly and keeping food at the safe temperatures, i.e. > 60 ℃ or ≤ 4 ℃.

A major food poisoning case involving 75 in-patients of two nearby hospitals was received in November 2012. Stool specimens of some affected persons yielded Clostridium perfringens. Epidemiological information revealed that the incriminated food items were provided by a food factory. Review of the food manufacturing process showed that the same kitchen facility was used to reheat all the cooked dishes supplied to the two hospitals. The food was then kept warm for more than two hours in mobile heated holding cabinets before they were delivered to the hospital wards. It was noted that some of these cabinets used for keeping and transporting food to the patients were found to have its operation temperature at below 60 ℃. We instructed the kitchen to follow good hygiene practices, particularly keeping the dishes at proper holding temperature. No further related cases were reported afterwards.

An Outbreak Related to Consumption of High Risk Food

Norovirus has been an important cause of viral food poisoning around the world. In Hong Kong , a majority of food poisoning outbreaks of norovirus were related to the consumption of oysters, which could be contaminated by norovirus (Figure 2). The virus in oysters can be killed through proper cooking.

Figure 2. Number of food poisoning outbreaks involving food premises and food business related to norovirus and consumption of oysters from 2006 to 2012.

In November 2012, we received 16 clusters of food poisoning cases affecting 41 persons from the DH related to the consumption of raw oysters in a hotel. Investigation revealed that oyster samples taken from that hotel were tested positive for norovirus. At the same time, a similar case involving another hotel was found related to consumption of raw oysters and oyster samples collected at that hotel were also tested positive for norovirus. Source tracing found that they were harvested from an oyster farm in England . The CFS instructed the distributor to recall all oysters originated from the farm concerned, and suspend import of oysters from the affected area. The British Consulate General was informed about the incident. No further related cases occurred afterwards.

An increase in the numbers of outbreaks and persons affected was observed in 2012. Consuming high risk food and keeping food at inappropriate temperature caused many food poisoning outbreaks last year. We should adhere to and practise the " Five Keys to Food Safety " to avoid occurrence of food poisoning.