Review of Food Incidents in 2012

Food incidents refer to events which have potential food safety implications. As the majority of food supply in Hong Kong is imported, apart from monitoring local food incidents, the Centre for Food Safety (CFS) also conducts daily surveillance of food incidents reported by overseas authorities and the mass media.

In 2012, a total of 1,008 food incidents were identified by the CFS. The figure was slightly higher as compared to 915 cases in 2011. As in past years, non-local incidents constituted the majority (98.3%) of all cases. Taiwan (45%), North America (27%), Mainland China (9%), Europe (8%) and Australia/ New Zealand (5%) reported the most cases. A 60% increase in cases reported by Taiwan had mostly accounted for the overall rise in incidents identified in 2012. No major food incident was identified in Taiwan.

Incidents involving vegetables, cereal, fruits and their products had the greatest increase, followed by those concerning aquatic products (Figure 1). Chemical and microbiological hazards accounted for most of the incidents as in previous years. Compared with the average percentage of 2007-2011, however, the percentage of chemical hazard related cases rose significantly in 2012 from 45.4% to 51% (Figure 2). 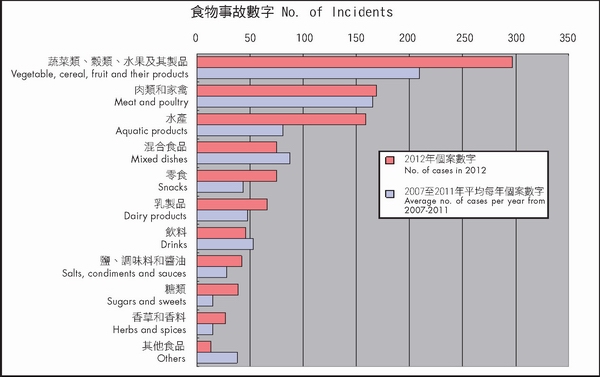 The CFS assesses the public health significance of each incident and takes appropriate actions, which might include contacting relevant authorities, issuing rapid trade alert, conducting sales check, and taking food samples for testing, making public announcement and initiating recall or issuing prohibition order. In 2012, the CFS issued 380 trade alerts, 14 press releases and 19 food alerts related to these incidents. In addition, the CFS has been posting incidents assessed to have limited local impact through the "Food Incident Post" on its website since September 2012 to alert individuals who might be in possession of related food products through e-trade, travel, or other personal reasons. A total of 139 incidents were posted in 2012.

Three of the detected food incidents that raised greater concerns in 2012 are highlighted below.

In September 2012, the CFS learned from the Canadian Food Inspection Agency's website that beef products from an establishment in Canada were contaminated with E. coli O157:H7 and 18 human cases were reported. Some consignments of the affected beef products had been exported to Hong Kong. The CFS immediately conducted investigation and took necessary actions including suspension of import of beef products from the establishment concerned, alerting the trade, tracing distribution and initiating recall of the beef products. A press release was issued to inform the public.

The import suspension was lifted on 18 December 2012 upon receiving Canadian authority's assessment report concluding that the risk of contamination has been effectively controlled at the establishment. There has not been any related local human infection case.

2. Peanut butter from the United States (US) contaminated with Salmonella

In September 2012, the CFS noted a multistate outbreak of Salmonella in the US with 42 people affected. One peanut butter manufacturer was suspected to be the source. Various peanut butter products and secondary products were recalled.

Investigation by the CFS found that an importer in Hong Kong had imported two of the products and recall was initiated. The importer voluntarily surrendered all remaining stocks for disposal. Sales check by the CFS at retail level did not find any affected products. The CFS alerted the trade to stop selling the products concerned and a press release was issued to advise the public not to consume them. There has not been any related local outbreak.

In mid-December 2012, a newspaper alleged that a suspected unlicensed food processing establishment supplied substandard cooking oil with high level of benzo[a]pyrene (B[a]P) to restaurants. The CFS immediately conducted investigation and took cooking oil samples from different premises for testing. Three oil samples of the same brand from a supplier were found to contain B[a]P at levels exceeding the Mainland limit of 10 μg/kg.

In consultation with the Expert Committee on Food Safety, the CFS has set an action level of 10 μg/kg for B[a]P in cooking oil for necessary enforcement actions. A targeted surveillance project on cooking oil was conducted and test results of B[a]P in 102 samples taken from various levels of the supply chain were all satisfactory. More information about the incident can be found at the "Benzo[a]pyrene in Cooking Oil" webpage.

Early intervention of food incidents is vital in controlling and aborting the potential risks associated with food hazards. The effective food incident surveillance and response system put in place has enabled the CFS to detect and manage food incidents in a timely manner.