Late last month, media reported that six instant noodle products (including udon) of the Korean brand "Nong Shim" were suspected of containing benzo[a]pyrene (BaP), a human carcinogen. According to the local agent, five of them were available for sale in Hong Kong. The Centre for Food Safety (CFS) took follow-up action and collected samples of the products manufactured in Korea for testing.

BaP is a kind of polycyclic aromatic hydrocarbons (PAHs) which belong to a large group of organic chemicals containing two or more fused aromatic rings, are fat-soluble and chemically stable. PAHs are ubiquitous in the environment, being present in air, soil, water and food. They may also be formed in food during incomplete combustion or burning of organic matters.

Occurrence in the Diet

Almost all food contains PAHs at low levels (0.01 – 0.1 μg/kg in uncooked food). Food processing such as roasting, grilling, barbecuing and smoking generates PAHs. Levels of PAHs, including BaP may vary depending on the processing conditions and are often higher in barbecued/smoked meat or fish (see Table). According to the Joint FAO/WHO Expert Committee on Food Additives (JECFA), cereals, vegetables, and fats and oils are major contributors to dietary exposure to PAHs.

The Food and Environmental Hygiene Department conducted a study on PAHs in 2004, aiming to investigate PAH levels in barbecued meat (including three kinds of siu mei, namely BBQ pork, roasted pork and roasted duck, and dried meat) prepared in different ways. It revealed that the higher the cooking temperature or the closer the distance from the heat source, the more PAHs were generated, and that charcoal grilling gave rise to more PAHs in foods than gas grilling and electric oven roasting (see Table). 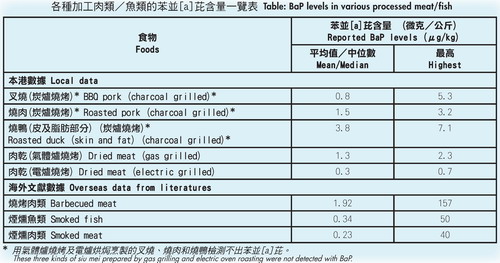 BaP is toxic to genes and can cause cancer in human. A safe intake level cannot be defined for this type of substance. However, JECFA commented in 2005 that the estimated dietary exposure to BaP might be of low human health concern. Whereas, the European Food Safety Authority in the 2008 evaluation commented that the exposure to PAHs as a whole might indicate a potential health concern for high consumers.

The European Union and Mainland China have set legal limits for BaP in various processed foods (ranged from 1 to 10 μg/kg), of which the same maximum limit of 5 μg/kg is set for processed meat/fish by both authorities. In Hong Kong, no legal limits of BaP are set in food. Risk assessment will be conducted on a case by case basis to assess the health risk of BaP in food. It is observed that the reported BaP levels in some processed meat/fish may exceed the 5 μg/kg level (see Table). To reduce PAH contamination in food, the Codex Alimentarius Commission has issued a Code of Practice on processing food by smoking and direct drying, and the CFS has also issued a guide to food manufacturers on preparing barbecued meats. 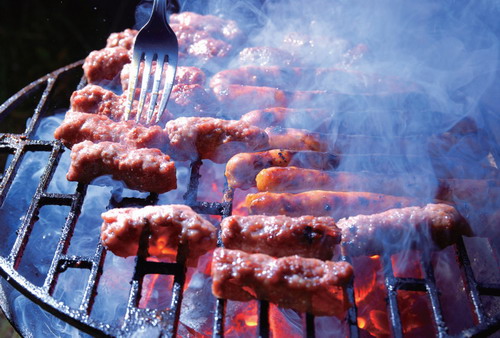 Charcoal grilling of meat may generate a high BaP level

The Findings on Instant Noodles

In June 2012, the Korean authorities detected BaP in a batch of smoked fish at a level exceeding the Korean legal limit of 10 μg/kg. Nong Shim Company Ltd. had used that particular batch of smoked fish as an ingredient in the instant noodle soup mix. Although the amount of BaP detected has low health concern, the company has voluntarily recalled the concerned batches of the six instant noodle products.

On 30 October 2012, the CFS released the testing results of the instant noodles, in that all the eight samples (including the five concerned products found locally), from different batches had no BaP detected. Furthermore, the local agent informed that imported products of the concerned batches had not been found. To allay public concern, the local agent has voluntarily removed all batches of the five products concerned from shelves. The CFS will continue liaising with the Korean authorities and closely monitoring the development of the incident.