More on Mycotoxins in Food

This is the last article of a series of three that focuses on mould toxins (mycotoxins) in food. We will talk about other mould toxins in this article. 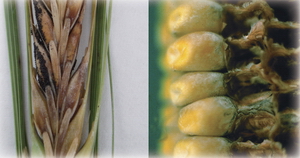 Other Mycotoxins in Food

Other than the aflatoxins that we discussed in the last issue, other mycotoxins, namely patulin, ochratoxins, fumonisins, trichothecenes and zearalenone are also known to scientists due to their potential harm to human health. A wide range of crops may be affected by mycotoxins, but some food-toxin pairs are more common. Some examples will be listed in the following paragraphs. 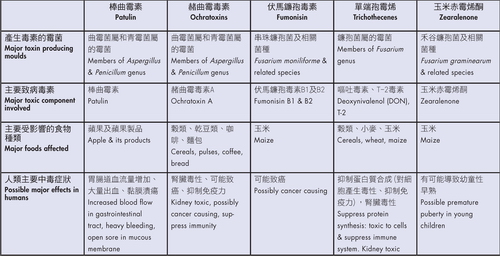 Patulin may cause gastrointestinal bleeding and it mostly occurs in apple and its products. As apple juice is generally considered a healthy food and is popular among infants, children and health conscious patrons of fresh fruit juice stores, patulin has attracted some international attention. In 2003, a local study found that all apple juice samples collected in Hong Kong complied with international standard and most of them had no detectable level of patulin, suggesting that there was little risk from patulin in apple juice locally.

Since patulin occurs in rotting apples but not apples in good condition, we should not consume apples that are mouldy or damaged. Cut and check the conditions of apples before making apple juice, as some mould growth affects only the apple core and the mould is invisible from the outside. It is also sensible to store apples properly to reduce physical damage and discourage mould growth. Dispose of apples if they are damaged. On the other hand, fermentation, like the one during the manufacture of ciders, can destroy patulin.

Cereals can be infected by a number of moulds that can produce mould toxins. Among them, ochratoxins are better known as they are more widespread while trichothecenes are less common.

Ochratoxin A is potentially carcinogenic. It mainly occurs in cereal products like bread, noodles and breakfast cereals. It is also found in a range of other food commodities, including coffee, cocoa, wine, beer, pulses, spices, dried fruits, grape juice, pig kidney and other meat, etc. In 2006, the Risk Assessment Study of the Centre for Food Safety revealed that the prevailing levels of ochratoxin A in local food were low and posed minimal risk to consumers.

Maize is the main host to mould that produce fumonisins and zearalenone toxins. Fumonisins are associated with a variety of adverse health effects in livestock and experimental animals. Currently, there is no direct evidence that fumonisins cause adverse health effects in humans because available studies demonstrate only inconclusive associations between fumonisins and human cancer. During the processing of maize kernels for the manufacture of tortilla and maize chips, i.e. the heating and alkali process, the fumonisins might become bounded. However, the effect on the intestinal tract upon the release of the bounded fumonisins is unknown.

On the other hand, zearalenone has oestrogenic effects in various animals, affecting vulva, mammary glands and fertility in females and causing feminisation in males. It is also suspected to cause premature puberty in young children possibly through contaminated food. Nonetheless, the two toxins are possibly of less concern locally as maize is not a staple food in Hong Kong .

Ways to Reduce the Amount of Mycotoxin Intake

As moulds are ubiquitous, there is no way to totally eliminate mould toxins from food. However, there are ways to reduce mycotoxins via good agricultural practices throughout the stages of planting, pre-harvest, harvest, storage, transport, processing and distribution of crops, and develop management system based on Hazard Analysis and Critical Control Points for food production.

As a consumer, we may reduce the exposure by not consuming foods with the presence of visible moulds, or foods that are dampened with unexpected moistures. Consumers should also store foods in a cool and dry place before consumption or follow storage instructions.