In the last issue, we mentioned that some process contaminants can be generated during dry-heat cooking such as frying, roasting and baking. In this issue, we will introduce to you ways to reduce health risks from dry-heat cooking.

In dry-heat cooking, either air or fat is used as medium of cooking. During the process, the food is cooked at a very high temperature (usually well above 100 oC) and it can cause chemical changes in the major components in food (i.e. carbohydrates, fats and proteins) and subsequently generate process contaminants.

Acrylamide as well as certain polycyclic aromatic hydrocarbons (PAHs), and heterocyclic amines (HCAs) have been shown to cause cancer in experimental animals while one PAH, benzo[a]pyrene, is carcinogenic to humans. Therefore, efforts should be made to lower our intake of these harmful substances and minimise any possible risk.

For consumers, the simple yet effective way to reduce the risk is to eat a balanced and varied diet, which includes a wide variety of fruit and vegetables, and they should moderate their consumption of fried, barbecued and fatty foods. In addition, steaming and boiling are preferable cooking methods especially for meat and carbohydrate-rich food. When choosing deep-frying, baking and barbecuing as cooking methods, consumers are recommended to take measures to reduce process contaminants (see Table 1). 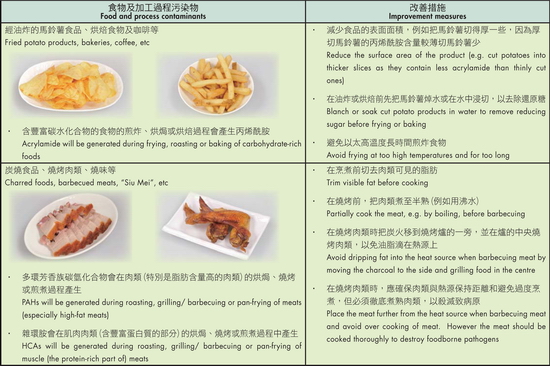 Trade Guidelines Issued by the CFS

With global efforts made by scientists, industries and regulatory bodies, various measures have been devised to reduce process contaminants related to dry-heat cooking. These mitigations involve modifi cations of recipes and food processing conditions. The Centre for Food Safety has issued two guidelines, A Guide to Manufacturers - Barbecued Meat in 2006 and Trade Guidelines on Reducing Acrylamide in Food in 2011 for trade members. These guidelines include practical and effective ways for reducing acrylamide and PAHs formation in food.

In the next issue, we will talk about process contaminants formed by fermentation and acid hydrolysis.