In late August 2011, a local newspaper reported detection of chromium (Cr) at levels between 0.21 and 0.64 mg/kg in vegetables sampled from farms registered for export to Hong Kong near Qujing, Yunnan Province and located about three km from an illegal chromium dumping site. We shall examine the potential impacts of chromium to public health and review the local control. 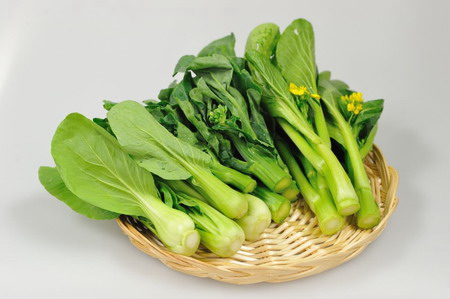 Shanghai cabbage, Chinese kale and flowering cabbage were tested for total chromium in a local news report in late August 2011

Chromium – From Nature to Food

Chromium and its compounds are naturally occurring and widely distributed on earth. They exist in rocks, soils, plants, animals and volcanic emissions in three main forms: most of them as chromium metals or Cr (III) compounds, while Cr (VI) mainly exists as products of industrial activities. According to a publication by the US National Research Council in 2005, Cr (VI) taken up by plants will be immediately converted to Cr (III) in their roots.

Chromium exists in the atmosphere mainly as particles, and is deposited into soil and water through precipitation. It is essential to health as it is necessary for insulin action. Seafood, meats and grains are good sources of dietary chromium. Chromium may get into our food chain through stainless steel, metals and pottery, when they are used as food containers.

Toxicity and Carcinogenicity of Chromium

Cr (III) and chromium metal are not carcinogens. However, excessive intake of Cr (III) may still cause the heart to stop beating. The US Environmental Protection Agency (EPA) has established a chronic oral reference dose of 1.5 mg/kg bw/day for insoluble Cr (III) salts, based on reduction of liver and spleen weight as toxicological endpoints in rat studies.

On the other hand, Cr (VI) has an acute toxicity of 50 to 70 mg/kg body weight, where it can cause liver and kidney damages. Chronic exposure to Cr (VI) compounds can affect skin, respiratory tract, kidneys, liver, gastrointestinal tract and the circulatory system. It has been shown to cause changes to genes and mutations in cells in laboratory. The International Agency for Research on Cancer established that Cr (VI), when inhaled, could cause respiratory cancers in occupationally exposed persons. For oral exposure, carcinogenicity has, however, not been established. A chronic oral reference dose of 0.003 mg/kg bw/day for Cr (VI) has been established by the US EPA based on organ changes in rat studies.

With the release of the above quoted media report, the Centre for Food Safety (CFS) has maintained close contact with State General Administration of Quality Supervision, Inspection and Quarantine, the Mainland authority, in following up the situation. The CFS has also stepped up chromium testing on vegetables, especially those from the farms in the affected area. The results were all satisfactory, with only three out of 148 samples taken from late August to mid September containing low level of total chromium detected from 0.05 to 0.06 ppm, much lower than the local regulatory level of 1 ppm on total chromium in vegetables.

As for the CFS regular surveillance, of the 944 vegetable samples taken between January 2010 and August 2011, only six (0.6%) were detected to have total chromium at a level ranged from 0.07 to 0.6 mg/kg. For the only sample that exceeded the Mainland standard of 0.5 mg/kg, we have conducted a risk assessment based on local food consumption data and it shows that adverse effects are unlikely. We have also found that the current Hong Kong regulatory level of 1 ppm of total chromium in vegetables would not pose adverse effects to the public health.

For more efficient regulatory control, the CFS has initiated a review on the regulatory standards on heavy metals, including chromium, in food. A working group has been formed under the Expert Committee on Food Safety.