Pesticides of Relatively Low Risk to the Public

Some pesticides are safer than others. Pesticides that meet one of the following criteria are generally of relatively low public health risk –

Examples of these pesticides are discussed below:

Bacillus subtilis strain GB03, a bacterium, is a natural enemy of some fungi. It can be used on crop seeds (e.g. peanuts, wheat, peas and beans) to suppress plant diseases caused by fungi. Since the bacterium colonises plant roots, its residue is not expected in the produce once the seeds are planted.

Yeast that is commonly used for baking and brewing can also serve as a pesticide. Its hydrolytic products (i.e. "yeast extract hydrolysate from Saccharomyces cerevisiae") can be used for the prevention of certain plant diseases in food crops, such as bacterial leaf spot disease of tomatoes and greasy spot diseases of citrus. Only a small amount is needed to achieve the desired effects and components of the yeast extract hydrolysate degrade rapidly in the environment, leaving little residue in food.

The Residues Are Identical to or Indistinguishable from Natural Food Components

Garlic is well regarded as a health food. Interestingly, its extract can be applied to various crops including cabbages, potatoes, carrot and berries to repel birds, insects or nematodes (round worms). Garlic extract has a long history of human consumption and harmful effect to humans is not expected. 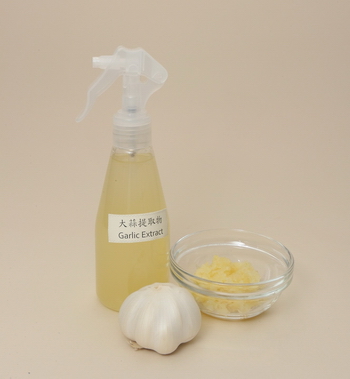 Garlic extract can be used as pesticide

Have you ever felt fatigue after rigorous exercise? You may like to blame the build-up of lactic acid in your muscle. However, lactic acid has a desirable effect of serving as a biochemical pesticide for attracting biting insects in traps. Lactic acid has been classified by the US Food and Drug Administration as Generally Recognized as Safe when used as a direct human food ingredient in accordance with good manufacturing practice. Lactic acid is also naturally occurring in foods (e.g. milk, meat and fruits) as well as fermented food products (e.g. yoghurt and pickles).

Nosema locustae , a single-celled micro-organism used to control insect in crops (e.g. cabbage). Available toxicological data shows that N. locustae does not appear to be hazardous to humans. In addition, it is rapidly inactivated by light and warm temperature.

The US Environmental Protection Agency (EPA) considered that food safety risks due to the above two substances are expected to be minimal.

As a well accepted principle, all pesticides have to be registered with the competent authority before application in agriculture. Their safety and efficacy will be thoroughly assessed during the registration process. Even though the establishment of a maximum permitted level in food has been considered not necessary for residues of the above pesticides, proper use in accordance with Good Agricultural Practice is a must so as to minimise the amount of residues in food and food safety risk.