Radioactive Contamination and the Food Chain

The damage caused by the massive earthquake on 11 March 2011 to the Daiichi Nuclear Power Plant in Fukushima, Japan has led to continuous release of radioactive materials to the surrounding areas. Subsequent to the detection of radioactivity in food produced in Japan and neighbouring areas, concerns have been raised over the possible contamination of our food supply. In this article, we are going to discuss how radioactive contamination may affect our health through the food chain.

I-131 is distributed over a wide area, found in water and on fresh produce and is rapidly transferred from contaminated feed into milk in the initial phase of contamination. If radioiodine is breathed in or swallowed, it will concentrate in the thyroid gland and increase the risk of thyroid cancer, particularly in children. Presence of I-131 in food is of immediate concern after a nuclear incident. However, I-131 has a short half-life of eight days; it takes less than eight weeks for I-131 to decay to 1% of its original radioactivity (Figure 1). 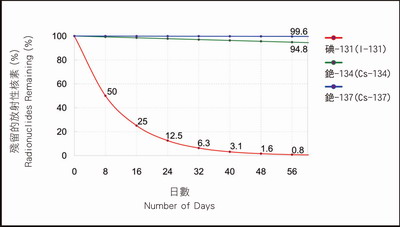 In contrast to radioiodine, radiocaesium has a long half-life (Cs-134: 2 years, Cs-137: 30 years). Radiocaesium can linger in the environment for many years and continue to present a problem for food and food production. It may have long term impact to human health. If radiocaesium enters the body, it is distributed fairly uniformly throughout the body's soft tissues such as muscle tissues, increasing the risk of cancer.

From the experience of the Chernobyl nuclear power plant accident in 1986, agricultural products, animals and water bodies were contaminated mainly by surface deposits of radionuclides, primarily radioidine, in the initial release of radioactive materials. After the early phase of direct deposit, the accumulation of relatively persistent radionuclides in food became increasingly important. Foods collected from the wild, such as mushrooms, berries and game meat continued to be a radiological problem and high levels of radioactivity have persisted for more than two decades. In the long term, Cs-137 in milk and meat and, to a lesser extent, in plant foods and crops remain the most important contributors to human internal dose.

In Hong Kong, we may be exposed to radioactive materials released from the damaged Japanese nuclear plant through the ingestion of contaminated foodstuffs. Due to the long distance from Japan (more than 3000 km), the released radioactive substances in the plume will be much diluted when it reaches Hong Kong, produce grown locally is not likely to be significantly contaminated by deposits of the radioactive fallout. However, depending on the concentration of radioactive materials in the atmosphere and amount of deposition, minute amount of radioactive caesium and iodine might be found in produce grown in neighbouring areas of Japan. Moreover, the accumulation of some persistent radionuclides in food produced in areas near the affected nuclear plant is of concern.

In view of the radiation leak at the Fukushima nuclear plant, the Centre for Food Safety (CFS) has stepped up surveillance at both the import and retail levels for food imported from Japan. Other than the detection of excessive radioactivity in three vegetable samples on 23 March 2011, which led to the issuance of a prohibition order to control import and supply of food from five prefectures in Japan, no unsatisfactory results have been detected. On the other hand, radioactivity of food produced locally or imported from areas other than Japan is being monitored through CFS's routine surveillance programme. Information obtained so far did not suggest that is an area of concern. With effective measures in place, foodstuffs available on market are not likely to be contaminated with high level of radioactivity. The CFS will keep in view the latest development on the issue and the information provided by the International Atomic Energy Agency and the World Health Organization and consider updating the prohibition order as appropriate. We will also continue to monitor radioactivity in food imported from Japan.

According to World Health Organization, minute amounts of radioactive materials might be found in food produced in countries other than Japan. The amounts detected so far were well below acceptable levels and would not pose a health concern.

The trade is not recommended to purchase instruments for radiological testing since professional expertise is required for proper testing and result interpretation.