In this article, we would like to update the situation of food poisoning related to food premises/ food business and highlight some important incidents in year 2010.

The roles of Centre for Food Safety (CFS) include investigation of food poisoning outbreaks related to food premises and food business. In year 2010, the CFS received referrals from Department of Health (DH) of 279 food poisoning outbreaks, affecting a total of 910 persons (Table 1). During investigations, our staff will identify the contributing factors and trace the sources of suspected incriminated food. Health advice on food, personal and environmental hygiene will be given to the food handlers.

The total number of outbreaks is decreasing since 2006. As shown in Figure 1, the decreasing trend could be attributed mainly to the reduction in food poisoning outbreaks caused by bacteria. 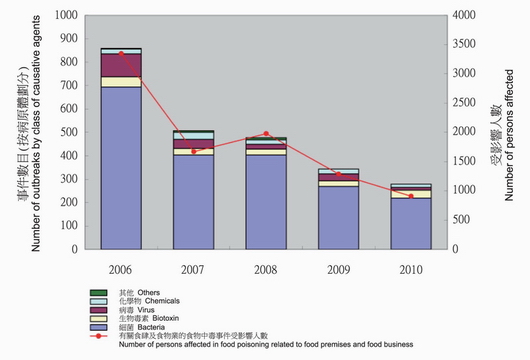 For the causative agents of both confirmed and suspected cases, bacteria were by far the most common causative agents, which accounted for about 78% of the outbreaks. Other causative agents were biotoxins (12%), viruses (5%) and chemicals (5%) (Figure 2). Figures are generally similar to those of the past four years, except that of biotoxin, which only accounted for 6% of all cases in 2006-2009, but accounted for 12% last year because of a relatively large scale paralytic shellfish poisoning outbreak. Vibrio parahaemolyticus, Salmonella spp. and Staphylococcus aureus, were still the top three causes of bacterial food poisoning outbreaks (contributing 90% of the bacterial outbreaks in total). 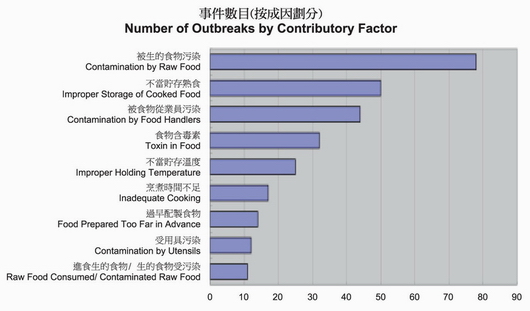 Figure 3. Contributory factors identified in food poisoning outbreaks related to food premises and food business in year 2010
Notes: More than one contributing factor could be identified in a single outbreak

In May 2010, 14 clusters of food poisoning outbreak affecting 29 persons related to Paralytic Shellfish Poisoning (PSP) were reported to CFS. The victims presented with neurological and gastrointestinal symptoms after consumption of fan scallops at home. The fan scallops were purchased from seafood stalls in nine different wet markets in Hong Kong. Control measures were taken at retail and consumer levels. All seafood stalls in the concerned markets were advised to voluntarily suspend selling of the suspected shellfish. The public were advised not to consume scallops by DH. Investigation could not identify the specific source of the fan scallops because of incomplete purchase records. No further related case was reported subsequently.

In the end of June 2010, 26 clusters of food poisoning outbreak affecting a total of 83 persons related to Chinese vegetarian Lo Mei were reported to CFS. All these cases involved consumption of vegetarian Lo Mei purchased from the take away section of a vegetarian restaurant in Kowloon . Stool samples from the victims were cultured positive for Vibrio parahaemolyticus which is a bacterium that is commonly associated with seafood. Although food samples from a different batch and environmental samples taken were all satisfactory for food poisoning organism, the incriminated food was possibly contaminated by seafood. The incriminated food was also found to be stored under inappropriate temperature for prolonged period. The food premises voluntarily suspended business for thorough disinfection. The preparation procedure of the vegetarian Lo Mei was reviewed and appropriate food safety plan was implemented before its resumption of sale.

In year 2010, the number of food poisoning outbreaks related to food premises and food business continued to decline for the fifth consecutive year. We anticipate that the legal requirement of keeping invoices as stipulated in the Food Safety Bill currently under vetting by the Legislative Council will aid in efficient source tracing and control of future food poisoning outbreaks.