A recent report on local suspected Paralytic Shellfish Poisoning (PSP) outbreak in May reminded us again the association between consumption of the beloved Hong Kong style steamed fan shell and food poisoning. We take this opportunity to examine again this subject matter.

PSP refers to an illness affecting human due to ingestion of shellfish containing PSP toxins. The affected persons usually present with neurological symptoms and are frequently accompanied by gastro-intestinal symptoms within minutes to several hours after consuming shellfish containing the toxin. The toxin is produced by small algae known as "dinoflagellates". This group of algae usually measures between 5 and 2 000 microns in length/diameter. PSP toxins producing algae is usually found in the tropical and moderate climate zones. Some identified toxins producing species are Alexandrium catenella, Pyrodinium bahamense, Gymnodinium catenatum , etc. Depending on the strains, ability to produce PSP toxins within the same species of dinoflagellates is varied. When the climatic and other environmental conditions are favourable, these algae grow rapidly and may produce toxin; and eventually cause "harmful algal bloom (HAB)". Shellfish, such as clams, scallops, mussels, feeding in areas affected by HAB may therefore be at a higher chance of containing the toxin produced by these algae.

PSP toxins producing dinoflagellates have mainly occurred in the waters near North America, Europe and Japan but occurrences in Asia are increasingly reported. Nowadays, they also occur in other regions such as Central America, South America and Oceania. In Mainland China, occurrences in Zhejiang, Fujian and Guandong Provinces were also reported. Many national authorities have implemented red tide/HAB monitoring and management programmes in their home countries. In Hong Kong, the AFCD has also established a red tide management framework with a view to minimizing the possible local impacts of red tide/HAB on marine fish culture activities and human health.

Effect of Cooking on PSP Toxins

A previous local study observed that about 50% of total PSP toxins were leaked out from fan scallop tissues (viscera, gill, mantle and adductor muscle) into the cooking liquid during steam cooking process. However, there was no significant loss of PSP toxins from gonad. In general, consumption of viscera of scallops was the most significant risk factor for causing PSP, while gonad and cooking liquid were the second most significant risk factors. 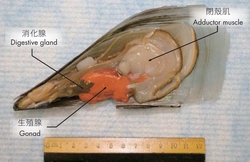 PSP occurrence varies among different regions. In Europe and South Africa, PSP cases occurred more often between May and November. However, in North America, more reported cases occurred between July and September. Types of shellfish, species of dinoflagellates, and climatic and environmental conditions, such as salinity, temperature, nutrients and sunlight, are important factors.

From time to time, sporadic cases of PSP have been recorded in Hong Kong. An earlier publication of Centre for Health Protection reported 69 suspected shellfish poisoning cases affecting 145 persons from 1997 to 2006, with more cases reported in May and June ( Communicable Diseases Watch Vol.4, No.13 ). In recent years, most suspected PSP outbreaks involved consumption of shellfish, especially scallops. The latest one was reported in mid-May 2010 ( Communicable Diseases Watch Vol.7, No.11 ), with a total of 14 clusters and 28 persons affected. It was found that consumption of viscera or gonad of scallop was associated with the illness.

According to the trade, fresh bivalves on sale in local retail outlets are mostly imported from the Mainland. Although algal blooms occur quite frequently in Hong Kong (~20-30 incidents/year), they seldom cause significant public health impact locally. The Hong Kong food surveillance programme detected 12 samples unsatisfactory for PSP toxin testing between 2007 and 2009. For these unsatisfactory samples, the Centre for Food Safety (CFS) had assessed the health risk, issued warning letters and requested relevant traders to stop selling the concerned products, obtained follow-up samples, traced their source and distribution as far as possible, announced the results timely and reminded the public not to consume the concerned products.

Tracing of food source is a problem in these incidents. The Food Safety Bill has recently been introduced into the LegCo which will provide food safety measures including, among others, a registration scheme for food importers and distributors and a requirement for food traders to maintain proper transaction records, which ensures that the Government can trace the source of the food more effectively and take prompt actions when dealing with food incidents.

Advice to Public and Trade