The Centre for Food Safety (CFS) announced that a local retailer withdrew from sale a batch of frozen, roe-on, half-shell scallops as they contained paralytic shellfish poisoning (PSP) toxins. The CFS found that the scallops contained PSP toxins at 114μg/100g. PSP is uncommon in Hong Kong , but sporadic cases and outbreaks, particularly involving scallops, may occur from time to time. This article provides an overview of PSP toxins in shellfish. 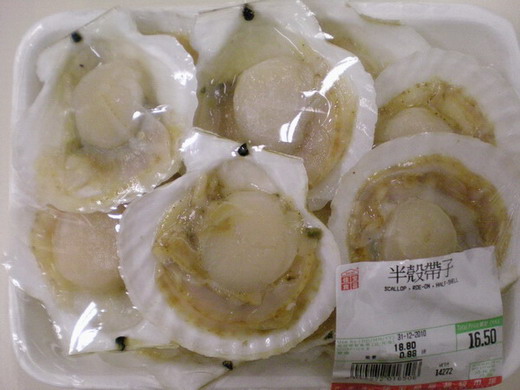 Example of Half-shell Scallops Involved in the Incident

What are PSP Toxins?

PSP toxins consist of 21 closely related toxins, with saxitoxin (STX) being the most toxic. The toxins accumulate in bivalve as they consume PSP toxins-containing algae, which occur in tropical to moderate climate zones. Although the distribution of PSP toxins varies among different species, it was reported that the consumption of viscera (digestive gland) and gonad contribute the most significant risk to PSP.

Toxicity of PSP Toxins to Human

The level of PSP toxins that can cause symptoms in human varies considerably because of variations in individual sensitivity. Also, the level detected varies by laboratory methods. The best understood member of the group, STX, is used as a benchmark.

The Joint Food and Agriculture Organization / Intergovernmental Oceanographic Commission / World Health Organization ad hoc Expert Consultation on Biotoxins in Bivalve Molluscs established a provisional acute reference dose of 0.7μg STX equivalents/kg body weight in 2004. With the recalled half-shell scallop as an example, a 60kg adult only needs to consume less than two pieces to reach the reference dose, where symptoms may start to appear.

There are several ways to keep the hazards of the PSP toxins away from bivalves for human consumption even though PSP toxins-contaminated bivalves look no different from normal ones. When harvesting bivalve shellfish, the trade should avoid areas that have recently been affected by PSP toxin-containing algae. Although keeping bivalves in PSP toxins free water can allow them to release the toxins and reduce their toxins level, the time required varies from species to species and this can have impact on cost and quality. Therefore, people still depend on monitoring systems to warn fishermen and shellfish farmers in areas where there are regular outbreaks of PSP toxin-containing algae.

Removal of all internal organs (evisceration) is an effective PSP-toxin reduction measure that can be used in shellfish like scallops, as the toxins concentrate in the digestive gland and the adductor muscle contains lower level of the toxins. Although PSP toxins cannot be destroyed by cooking, the cooking process can transfer the heat-resistant toxins to the cooking liquid (about half of the toxins are transferred in a local study with scallops) and render it toxic. Therefore, discarding the cooking liquid may reduce the level of PSP toxins.

The CFS has been regularly monitoring shellfish in Hong Kong for PSP toxins. From 2007 to 2009, about 1,249 samples were analysed for PSP toxins and 12 (<1%) of them were found unsatisfactory.