A prepackaged frozen half-shell scallop sample taken recently by the Centre for Food Safety (CFS) was found to contain Paralytic Shellfish Poisoning (PSP) toxin, at a level of 114 micrograms/100 grams.

Details of the concerned product are as follows:

"PSP toxin can cause symptoms such as numbness of mouth and limbs and gastrointestinal discomfort. In severe cases, paralysis with respiratory arrest and even death may occur." a CFS spokesman said today (January 12).

PSP toxin is a natural toxin sometimes found in bi-valve shellfish. It is heat-stable and cannot be destroyed through cooking.

"Regarding the unsatisfactory sample, the CFS has taken follow-up actions, including alerting traders of the problem, tracing the source of the scallop, directing the concerned supermarket to stop selling the food in question and issuing a warning letter to the supermarket.

"If consumers have bought the concerned product, they should not consume it. We are monitoring the situation," a CFS spokesman said.

Some precautionary measures to avoid shellfish poisoning are as follows:

* Remove the viscera before cooking, avoid consuming the cooking sauce and eat a small amount of shellfish in one meal;
* Children, patients and the elderly may be susceptible to poisoning and should be cautious in consuming shellfish;
* When symptoms occur after consuming shellfish, seek medical advice immediately. 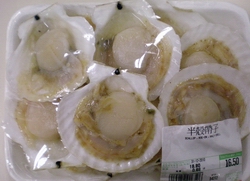