On 7 August 2010, local media reported that a brand of infant formula sold in the Mainland had allegedly caused breast enlargement and other signs of puberty (ie, precocious puberty) in female infants aged between 4 and 15 months in Hubei province. The Mainland Ministry of Health (MOH) set up a taskforce to investigate the incident. On 15 August 2010 , the MOH announced the test findings, which revealed that the alleged milk contained estrogen and progesterone at levels normally present in milk while hormones that were prohibited in the Mainland were not found. MOH concluded that the reported early development of breast in the infants was not related to the consumption of the alleged infant formula. This article discusses the issue of sex hormones in milk. 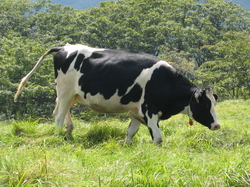 Hormones are chemicals produced by humans and living organisms to direct or exert effects on growth, reproduction and even mood. Sex hormones are an important group of hormones for controlling sexual maturity and reproduction. Estrogen and progesterone in females and testosterone in males are the most important naturally occurring, or endogenous, sex hormones.

It has been known that cow's milk contains the natural female sex hormones. In commercial dairy operations, a high percentage of the milk-producing cows are pregnant shortly after giving birth to the previous calf. The pregnancy status causes them to secrete higher levels of estrogen and progesterone and hence the resulting milk produced may contain considerable amount of such hormones.

Of greater public health concerns are exogenous sex hormones, ie, chemicals manufactured in laboratories that mimic functions of naturally occurring sex hormones. They are usually given to animals or humans for certain medical or other purposes. For instance, exogenous sex hormones may sometimes be used for induction of ovulation to facilitate pregnancy. Nonetheless, a good husbandry practice should ensure that milk produced shortly after injection of exogenous hormones will not be used for commercial use. As some exogenous hormones are found to be carcinogenic to humans, international authorities usually exercise strict control or even prohibition on the occurrence of such exogenous hormones in foods.

Regulatory Control of Sex Hormones in Milk in Hong Kong

The local food law prevents the selling of food unfit for human consumption. The Harmful Substances in Food Regulations (Cap 132AF) prohibit the occurrence of three exogeneous hormones, namely dienoestrol, diethylstilboestrol or hexoestrol, including salts and esters thereof, in any fish, meat or milk.

The Centre for Food Safety (CFS) has put in place a regular Food Surveillance Programme for testing hormones in food samples taken at the import, wholesale and retail levels. Food items covered included game, meat, poultry, milk and dairy products, fishes, crabs, shrimps and shellfish, etc. Results of all samples taken since 2007 were satisfactory. In response to the recent Mainland incident, the CFS tested additional samples of milk powder and did not find any prohibited sex hormones. The levels of natural hormones found in the samples were within satisfactory limits.