Last month, the Centre for Food Safety (CFS) released the results of a study which examined the level of ethyl carbamate (EC) in local fermented foods and beverages. The study found that EC was present in varying amounts in different local fermented food and beverage items. In some alcoholic beverages such as yellow wine, sake and plum wine, relatively higher levels of EC were found. As a group, "alcoholic beverages" was identified as the main dietary source of EC for alcohol drinkers. In this article, we will talk more about alcohol in relation to EC.

Ethyl carbamate also known as urethane, is a contaminant naturally formed in fermented foods and alcoholic beverages during the fermentation process or during storage. EC has also been used as human medicine which is now banned due to toxicological concerns and lack of effi cacy. Variable levels of EC have been found in different alcoholic beverages (Figure 1). For example, spirits, particularly those made from stone-fruits such as cherries, apricots or plums, usually contain higher amount of EC while beers contain low levels. EC levels can differ greatly between different types of alcoholic beverages e.g. the mean EC contents in fruit brandy in some reports were over 600 times that of beer. 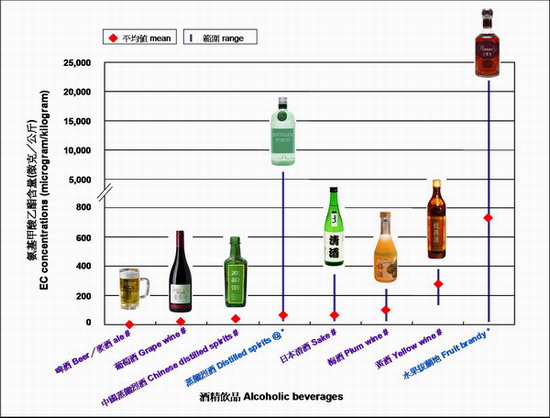 # Levels of EC drawn from a limited number of samples tested in the risk assessment study on Ethyl Carbamate in Local Fermented Foods conducted by the CFS
* Levels of EC reported overseas (WHO Food and Nutrition Paper 82, 2006; EFSA, 2007)
@ Distilled spirits excluding fruit brandy

Formation of EC in Alcoholic Beverages

Ethyl carbamate can be formed from various substances present in alcoholic beverages and their break-down products as a result of the fermentation process. These precursor substances, e.g. urea, cyanate and citrulline, react with ethanol to form EC in alcoholic beverages. The amount of EC formed depends on the key factors of light exposure and elevated temperature.

Public concerns regarding EC in foods are related to its potential to cause cancer in human. EC has been observed to cause various types of cancer in experimental animals. In 2007, the International Agency for Research on Cancer (IARC) up-graded the classification of EC to Group 2A "probably carcinogenic to humans".

A risk assessment was conducted by the CFS based on the EC levels measured in our study and the preliminary consumption data of the Population based Food Consumption Survey 2005 - 2007. It was found that for the general population, dietary exposure to EC from consumption of fermented foods and beverages is unlikely to pose health concerns. However, health risk of EC cannot be ruled out for high consumers of alcoholic beverages, e.g. distilled spirits (>270mL/day), plum wine (>76mL/day), grape wine (>250mL/day) on a regular basis.

Formation of EC can be reduced significantly when alcoholic beverages are kept at low light conditions and at lower temperatures. During transport and storage, care should be taken to maintain the correct cold chain preferably at or below 20°C and critically not above 38°C. At the temperatures at which most wine cellars are maintained to keep the sensory properties and qualities of grape wine (i.e. below 20°C ), less increment in EC content is expected.