Recently, the media reported that a consumer organisation in Brazil has conducted a study assessing the level of benzene, which is a cancer-causing agent, in soft drinks available in the Brazilian market. Out of 24 samples, 7 were found to contain benzene. This article provides more information on benzene in soft drinks. 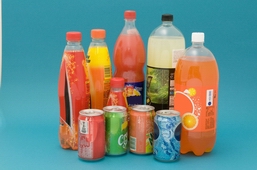 Illustration:Soft drinks that may have used benzoic acid as preservative

Benzene is a colourless and highly flammable liquid with a characteristic aromatic odour. It is a natural part of crude oil.

Benzene is present in the environment through human activities such as vehicle emissions and cigarette smoking. In addition, benzene is produced commercially to make other chemicals, dyes, detergents and some plastics. It may also, to a lesser extent, be released naturally from volcanoes and forest fires.

Since benzene is present ubiquitously, it may contaminate our food and water supplies. The presence of benzene in food can also be attributed to other potential sources.

Why is Benzene Found in Some Soft Drinks?

In the early 1990s, it was found that benzene could be formed in soft drinks containing both（1） benzoic acid or its salts and（2）ascorbic acid（vitamin C）, especially in the presence of light and elevated temperatures.

Benzoic acid and its salts [INS 210-213] are preservatives which can be added to foods including soft drinks to prevent the growth of bacteria, yeasts and moulds. In Hong Kong , under the Preservatives in Food Regulation, benzoic acid and its salts are allowed to be used in specific foods such as soft drinks as preservative. They are also naturally present in some foods e.g. cranberries, prunes, plums and most berries.

Ascorbic acid [INS 300] can be used as an antioxidant. It is also naturally present in a variety of fruits and vegetables.

However, it is important to note that the presence of benzoic acid or its salts and ascorbic acid in soft drinks does not necessarily result in the formation of benzene. Many factors e.g. pH, exposure to high temperature and UV light, presence of certain minerals and sweeteners etc. may affect the benzene formation.

Acute exposure to high concentrations of benzene primarily affects the central nervous system in humans. Benzene can cause chromosomal changes in humans. Long-term exposure to benzene can lead to cancer of the blood-forming organs. Based on available inhalation data in occupationally exposed workers and supported by evidence in animal studies, the International Agency for Research on Cancer considers benzene to be carcinogenic to human（Group1）. The World Health Organization （WHO） has not established any tolerable intake level for benzene.

Surveys conducted by various overseas food authorities showed that the levels of benzene found in soft drinks were generally less than the WHO guideline value of 10μg/L of benzene established for drinking water.

In countries such as the U.K. and U.S where beverages containing benzene levels above the drinking water guidelines for benzene established by the WHO or benzene standards set by their own country, the trade have voluntarily withdrawn the products from markets and/or reformulated them to reduce the benzene level.

Many food authorities such as the U.S. Food and Drug Administration, U.K. Food Standards Agency and Food Standards Australia New Zealand are of the view that exposure to low levels of benzene from soft drinks does not raise any public health concerns. In 2009, the Codex Committee on Contaminants in Foods also noted that benzene in soft drinks was not a major contributor to overall benzene exposure of the population and there were various trade guidance available, in particular the "Guidance Document to Mitigate the Potential for Benzene Formation in Beverages" developed by the International Council of Beverages Associations, to limit the formation of benzene in soft drinks.

The principal route of daily exposure to benzene in the general population is through the inhalation of ambient air. Food only contributes minor amounts to a population's daily benzene exposure, with the intake estimated to be less than 2% of that from inhalation. For smokers, it is likely that cigarettes contribute significantly to their total daily exposure of benzene. （Table 1）

In the past three years, the Centre for Food Safety has taken some 20 samples of soft drinks for testing of benzene. All results were satisfactory.

Illustration:Food label of drink containing both sodium benzoate and ascorbic acid as ingredients