After having an overview of pathogenic bacteria in the last two issues, we are going to see another bug in food, which is around 10 to 100 times smaller than bacteria and is not visible under a light microscope – the virus.

Viruses, in brief, are composed of genetic materials, i.e. DNA or RNA, enclosed by a protein and/or membranous coat. They are very different from bacteria besides just being smaller. Bacteria can grow and multiply in suitable environment. For viruses, they need to infect a cell and pass their genetic materials into that cell. Subsequently, they use the cell's resources to produce more viruses which will then invade more cells. As they require a cell to replicate, the viruses are not able to grow in food and water. Some general characteristics of viruses and bacteria related to foodborne disease are shown in the table below:

Although the number of viruses in contaminated food will not increase, the infective dose of most viruses is presumably low (10 to 100 infectious viral particles). This feature is clearly distinct from food poisoning caused by pathogenic bacteria where the bacteria grow to large number to infect or produce toxin to cause illness. In addition, most foodborne or waterborne viruses are relatively resistant to heat, disinfection and pH changes.

Viruses in Food that can Cause Disease

The foodborne or waterborne viruses can be divided into three types according to the diseases caused by them: (i) gastroenteritis; (ii) hepatitis; and (iii) other illness. Examples are shown in the table below:

Source: Codex Alimentarius Commission, Discussion Papers on the Viruses in Food, 1999 and 2005 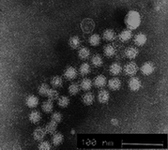 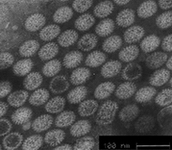 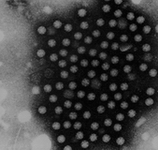 Among the viruses that cause gastroenteritis, norovirus has been the commonest viral agent associated with food poisoning in Hong Kong . Viral gastroenteritis commonly results in vomiting or diarrhoea.

Types A and E of hepatitis viruses are related to contaminated food or water and can cause hepatitis A and E respectively. Locally, hepatitis A is found to be less prevalent than before, but attention has been drawn over the increasing trend of hepatitis E infection.

Enteroviruses are a diverse group which contains many types of enteroviruses and associates with a wide range of symptoms. The lining of gut is the primary site of infection for most of the enteroviruses and they can cause other illness after migrating to other organs like the central nervous system or the liver.

Transmission of Foodborne or Waterborne Viruses

Viruses can be transmitted via paths other than contaminated food, like directly or indirectly through the faeces or vomits of an infected person. This is common especially in an institutional setting such as nursing home and elderly centre. Other routes of transmission may mask the original food or water source.

Prevention of Getting Viruses from Food

Two of the main sources of viral infection are shellfish and food items handled by infected foodhandlers. Shellfish can be a source of foodborne viral infections because of their ability to concentrate viruses present in the water environment and they may be consumed raw or undercooked. Infected food handlers or food handlers who have come into contact with sick people can help to spread the virus via food. In some cases, an infected foodhandler may not have symptoms (carrier status), like during the recovery or incubation period.

To prevent foodborne viral infection, strict observance of environmental, food, and personal hygiene is important. Dining utensils should be cleaned thoroughly before use. People, especially food handlers, should keep hands clean, e.g. by frequent handwashing, and those with gastroenteritis/hepatitis symptoms should avoid preparing food in a time-frame as advised by a doctor. On the other hand, high risk food like shellfish should be bought from reputable and reliable suppliers. Susceptible populations such as children, elderly or pregnant women should avoid consuming raw shellfish or seafood. Moreover, cooking shellfish thoroughly before consumption can prevent both bacterial and viral food poisoning.