Pesticide Residues in Food (Part I)

From time to time, we hear different reports on pesticide residues in food and their adverse effects on human health. However, do we really KNOW pesticides? In the coming three issues, this column will have a closer look at pesticides – from their origins to safety evaluation and setting of permitted levels in food.

Many Things around Us are Pesticides

In broad sense, pesticide is any substance or mixture of substances intended for preventing, destroying, repelling or mitigating pest. Any living organisms that are not wanted because of their damage to crops or properties, or affect human or other animal health could be regarded as pests. Pesticides are commonly used to treat these pests and their presence is ubiquitous. Few people have not applied domestic pesticides such as cockroach sprays at home. 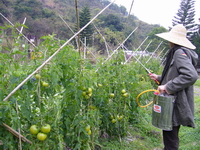 A Brief History of Pesticides

As early as around 1000 BC, people have used different chemicals (e.g. sulphur) as pesticides. Advances in chemical science and the adoption of intensive farming practice have led to the development of more effective chemical pesticides. Chemical pesticides were, at one stage, championed as human's success over nature. But pesticide resistance, damage to the environment and adverse effects on human health have overshadowed their subsequent use. With more stringent control on pesticides, pesticides have apparently found their place in the agricultural system. Two important classes of chemical pesticides, organophosphate and organochlorine, with food safety concerns are detailed below:

Although most of the commonly used pesticides are synthetic chemicals, biopesticides have gained their popularity in recent years, as a result of increasing popularity for organic products. Biopesticides are pesticides derived from natural materials such as animals, plants and bacteria. The most well-known biopesticide comes from the bacteria Bacillus thuringiensis (Bt).

Pesticide Residues in Food – the Wrong Item in the Wrong Place?

The proper use of pesticides could improve the quantity and quality of food. The days that farmers found half of their crops being eaten up by worms might have been gone! However, the use of pesticides in food production would inevitably leave some residues in some of the products. Risk to human health could be reduced with proper usage of pesticides. Although most of the pesticides are used during crops growing (pre-harvest) , pesticides could also be applied during storage and transport of the crops (post-harvest). Moreover, food animals may accumulate pesticide residues in their body through the consumption of feed containing pesticide residues.

Pesticides that are not applied intentionally during food production may also cause residual problems. Some pesticides are persistent in the environment and traces of them may contaminate our food.

The next issue of Food Safety Platform will cover the safety of pesticides. Do not miss it!