How Can Risk Assessment Inform Us of a Food Risk?

Occasionally, surveys conducted by various parties may report the detection of certain chemicals in food products and that these chemicals can cause cancer. These reports may worry some audiences, influencing their decisions and desire to purchase foodstuff. In order to make a sensible food choice, we need to understand the relationship between the detection of certain substances in food and the risk that these substances pose to the consumer.

The Differences between Hazard and Risk

Hazard and risk may sometimes be loosely considered to be the same by some; they are in fact related but different. In scientific term, hazard is the inherent capability of an agent or a situation to have an undesirable effect. Risk, on the other hand, is how likely, or the probability, that the negative outcomes will occur. For example in everyday settings, a running car is a hazard. When we are staying at home, the risk of being hit by the running car is negligible or approaching zero. However, we need to go out to the street in our daily living and thus have the chance to meet a running car. When we cross the road at an appropriate crossing point, such as a footbridge, subway, or zebra crossing, the risk of being hit by a car is low. However, the risk increases if we disregard traffic rules or jaywalk, such as failing to use the designated crossing point or crossing the road when the red pedestrian light is on. (Figure 3)

In the context of food safety, a hazard is a biological (e.g. disease causing bacterium), chemical (e.g. heavy metal) or physical (e.g. metal fragment) substance present in food that has the ability or potential to cause an undesired health condition to the consumer. It can be introduced in food at any stage of the food chain, from primary production, harvesting, processing, packaging, storage, preparation to even serving. 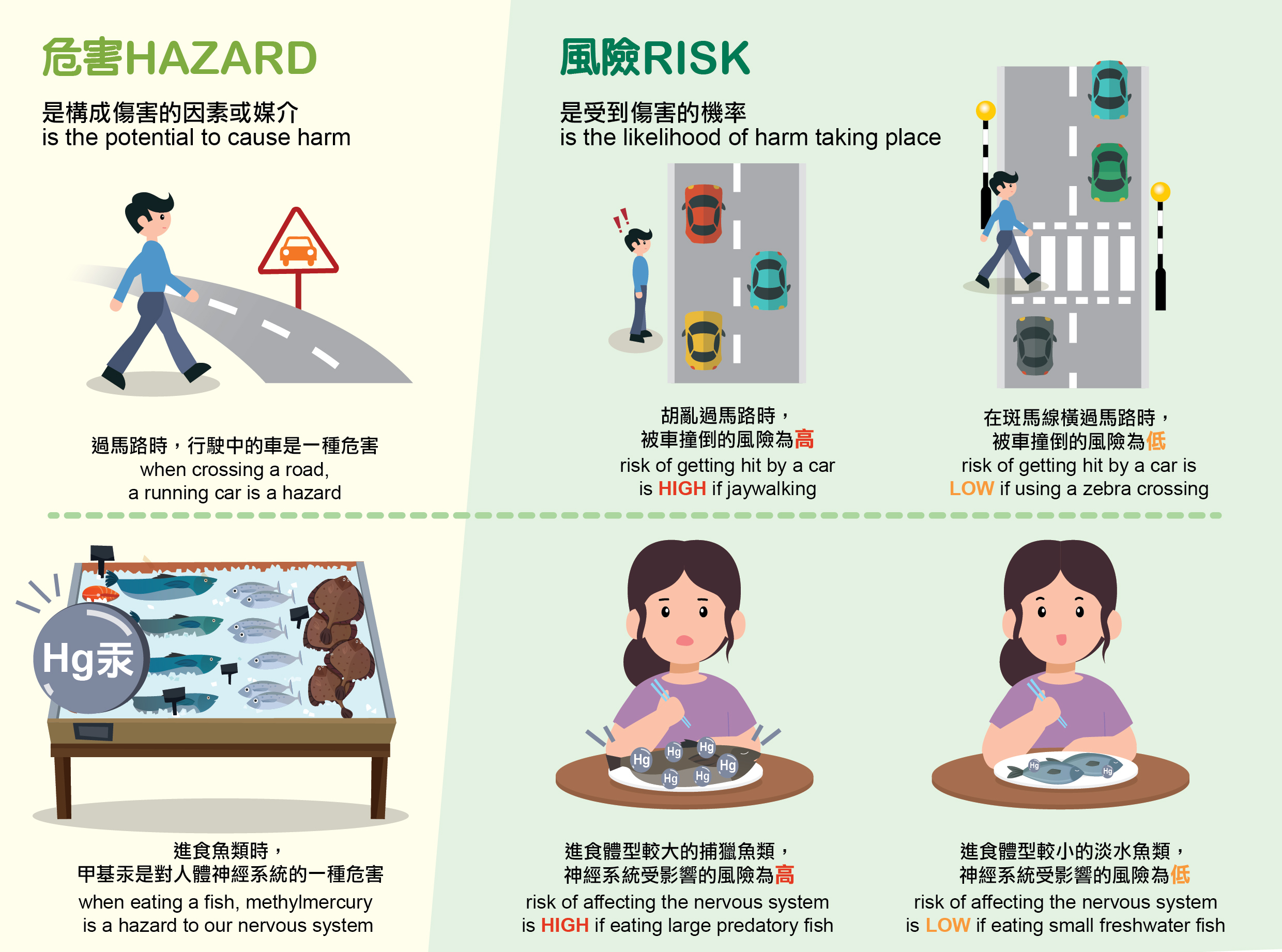 Do All Foodstuff with a Hazard Imply Unacceptable Food Safety Risks?

Not necessarily! While risk already implies the existence of a hazard, the likelihood of consumption of the food, the level of intake by a person or the population as a whole, and the severity of the health effects that may occur due to exposure to the particular hazard should be taken into account. To assess whether a food poses an unacceptable food safety risk to consumers, we first learn about the risks in food and how they affect health.

Take chemical risks as an example, mercury is a heavy metal that is abundant in the environment from natural and human sources. It primarily accumulates in the food chain in the organic form methylmercury, particularly in fish. Methylmercury, if consumed in excessive amount, has the potential to cause adverse effect to the developing neurological system in humans. A certain amount of methylmercury may inevitably be found in salmon, a fish that is a rich source of omega 3 fatty acids which benefit cardiovascular health. Should we avoid salmon at all costs?

Zero Risk Does Not Exist

As long as we eat, "zero-risk" in food safety is probably unattainable, though we can reduce the risk as much as we can. Certain effects, such as the ability to cause cancer, might easily alarm people due to the heightened perceived danger. However, the impact of the presence of a certain substance in food should be better informed by science using the risk assessment result, as its presence does not necessarily equate to causing health harm.