In early December 2007, a Mainland authority detected potassium bromate, a possible carcinogen, in certain potato chips imported from the USA and Japan . However, bromate was not detected in similar products from the same brands sampled by the Centre for Food Safety locally.

Bromate was used in treating flour in the past as they can improve the properties of dough. International authority JECFA in 1988 opined that bromate should not be present in food. However, low level of bromate used in flour treatment was allowed provided that its level was not detectable in the final product. With advancement in analytical techniques, it was later found that residues of bromate could be present in the finished product. Subsequently, JECFA concluded that it was not appropriate to use bromate as flour-treatment agent. Therefore, bromate should not be added into flour.

Food manufacturers and importers should source food ingredients from reliable sources and should ensure that flour or flour products do not contain bromates.

Illustration: Bromate was not detected in the locally sampled potato chips 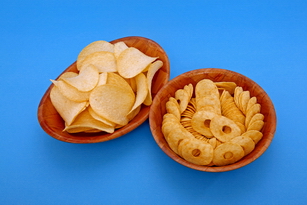