Is Air Frying a 'Lesser Evil' Version of Deep Frying?

In recent years, the air fryer has been an increasingly popular kitchen appliance in Hong Kong since its introduction a decade ago, with air fryer recipes sweeping around the corner. It appeals to many local households due to its compact size and versatility to prepare a wide variety of dishes. The appliance is also touted to use much less oil compared with deep frying, and cook more quickly than the convection oven. This fits in well with the lifestyle and settings of small families. In this article, we will discuss what air frying is, its pros and cons in terms of food safety, and the precautions when preparing food with an air fryer. 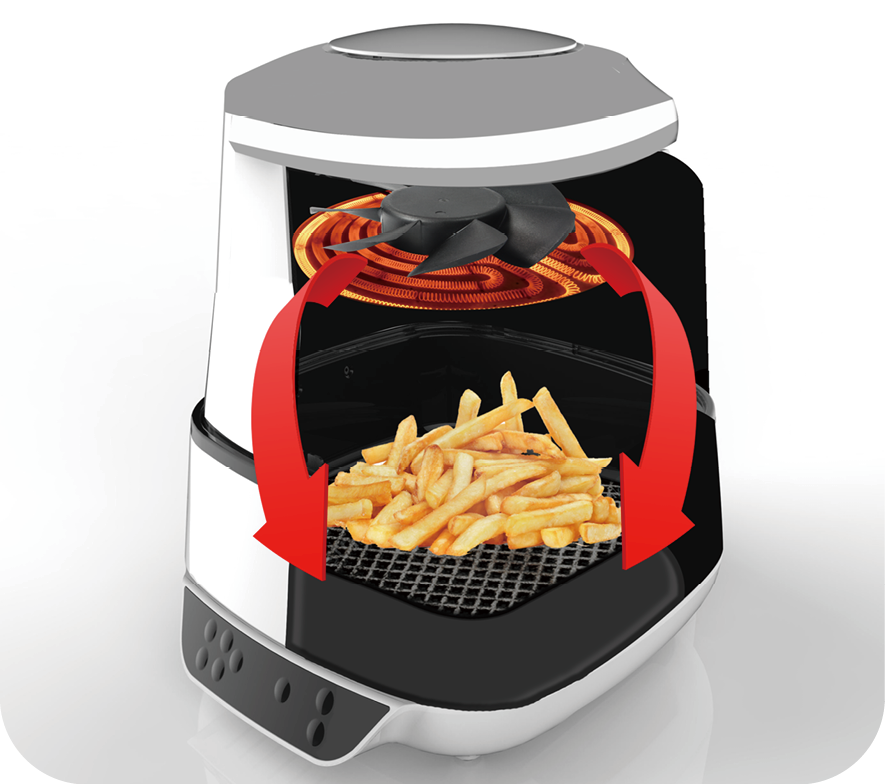 Figure 2:  The basic principles of air fryers – Rapid circulation of hot air by a fan next to a heating element. Food is kept close to the heat source and oil drips are collected beneath the perforated basket.

How Does an Air Fryer Work?

Albeit its name, an air fryer is actually not a deep fryer, but rather a small, countertop convection oven. Like a convection oven, the food is heated by a heating element with air circulation aided by a built-in fan. For air fryers, the food sits closer to the heat source, being blown by hot air up to about 200°C at high speed. Food is cooked inside a perforated basket which facilitates heated air to circulate around the food. The circulating air current can brown the food surface, making it crispy without drying out the centre. This cooking process mimics the result of deep frying with only little or no oil applied. Since food is cooked by moving air in a small, confined area, the fryers will work best when the food is prepared in smaller bits without overlapping.

Is Air Frying a Healthier Way to Cook?

To answer this question, we need to consider different areas of food safety and nutrition as a whole.

As hot air is the medium of heat transfer instead of hot oil, oil is often added only sparingly during preparation of air-fried food to improve the resulting texture. Also, any fat-containing meat juice drained from the meat is collected separately beneath the perforated basket.

While being possible to reduce significant amount of total fat content in food, air frying involves high-temperature dry-heat cooking, similar to baking, which facilitates the formation of chemical contaminants formed during high temperature cook such as acrylamide and polycyclic aromatic hydrocarbons. People should also be careful with what they choose to eat, and maintain a balanced diet which includes plenty of fruits and vegetables with the total amount of fat and salt in check.

Formation of Acrylamide During Cooking

One of the chemical contaminants formed due to high temperature cooking, acrylamide, can probably cause cancers in humans. It can be formed in an air fryer when carbohydrate-rich food is cooked at 120。C or above in the presence of the free amino acid asparagine and reducing sugars like glucose and fructose. As a probable human carcinogen and is also genotoxic, acrylamide has no safe level for consumption and it is best to reduce the level as low as reasonably possible.

The evidence on air frying in reducing the amount of acrylamide produced when compared with deep frying remains inconclusive: although a number of studies found that air fried potatoes contain less acrylamide than comparable deep-fried ones, a few also reported no significant differences in the level of acrylamide formed in both cooking methods. Other factors, including the composition of potatoes or starches used, surface area of food, and cooking time and temperature, also add to the complexity regarding the formation of acrylamide. As a rule of thumb, it is safer to ‘go for gold' when air frying – aim for a golden yellow colour or lighter when preparing starchy foods like potato, taro and bread and do not overcook them.

One should ensure that the food is cooked thoroughly, especially for bigger chunks of food; cook in batches to prevent overloading the air fryer. Pay attention to some parts of food that are more prone to getting burnt, forming hazardous chemical contaminants as a result. Turn the food occasionally to promote even cooking and to prevent burn. In a nutshell, always cook well done, but don't char your food.