The Truth about Nitrate and Nitrite in Vegetables

Vegetables are essential components of a healthy diet since they are good sources of dietary fibres, vitamins and minerals, and have beneficial health effects against chronic diseases and cancers. However, some people may have concern on the health effects caused by the nitrate and nitrite in vegetables. Do people really have to worry about that? Let's take a closer look into the nitrate and nitrite in vegetables.

Nitrate and Nitrite in Vegetables

Nitrate is widely distributed in the nature and can be found in soil, water and food, and is a crucial nutrient for the growth and development of plants. Nitrate can be converted into nitrite naturally and the process is accelerated in the presence of bacteria. Inside the human gut, nitrate can also be metabolised into nitrite. Apart from vegetables, humans are exposed to nitrate and nitrite in many other ways such as from water and processed meats (e.g. ham and sausages) where they are used as food additives. 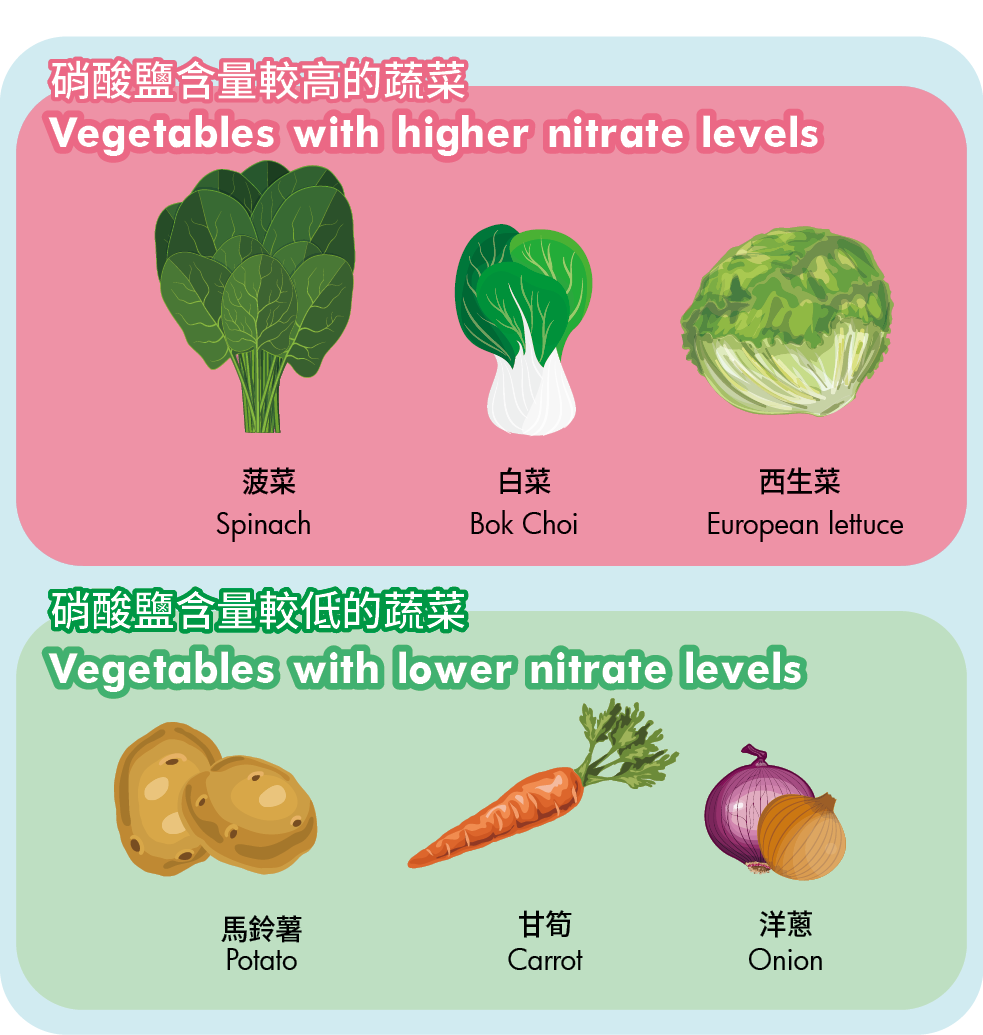 Health Implications of Nitrate and Nitrite

Nitrate itself is relatively non-toxic but its metabolite, nitrite, can oxidise haemoglobin in blood and render it unable to carry oxygen inside the human body. This medical condition is known as methaemoglobinaemia and affected persons will have their lips and skin turned blue. While methaemoglobinaemia are rarely seen in healthy individuals, young infants are more susceptible to it because of the immaturity of the digestive system, resulting in proliferation of bacteria and conversion of nitrate to nitrite. Also, fetal haemoglobin in young infants are more easily affected by nitrite and on the other hand they are less capable to convert the methaemoglobin back to normal state.  This condition in babies is called 'blue baby syndrome'.

Nitrite may also react with amines to form nitrosamines in the body through a process known as endogenous nitrosation. Nitrosamine is potentially cancer-causing in experimental animals, but epidemiological studies do not suggest that nitrate intake from diet is associated with increased cancer risk. When nitrate is consumed through a normal diet containing vegetables, other bioactive substances such as vitamin C may inhibit the endogenous formation of nitrosamines. The European Food Safety Authority also considered that the beneficial effects of eating vegetables and fruit outweigh the potential risk to human health from exposure to nitrate through vegetables.

Factors Affecting the Nitrate and Nitrite Contents in Vegetables