Do you know that partially hydrogenated oils (PHOs) could be hidden in many processed foods? To name a few, PHOs can be found in oils for deep frying crispy chips, margarine/vegetable shortening for making puff pastries and biscuits flaky. PHOs are the primary source of industrially-produced trans fatty acids (IP-TFAs) which the World Health Organization (WHO) aims to eliminate from the global food chain.  This article is an effort to explain a thing or two about PHOs, a hidden attacker which should be kept at bay for your heart health. 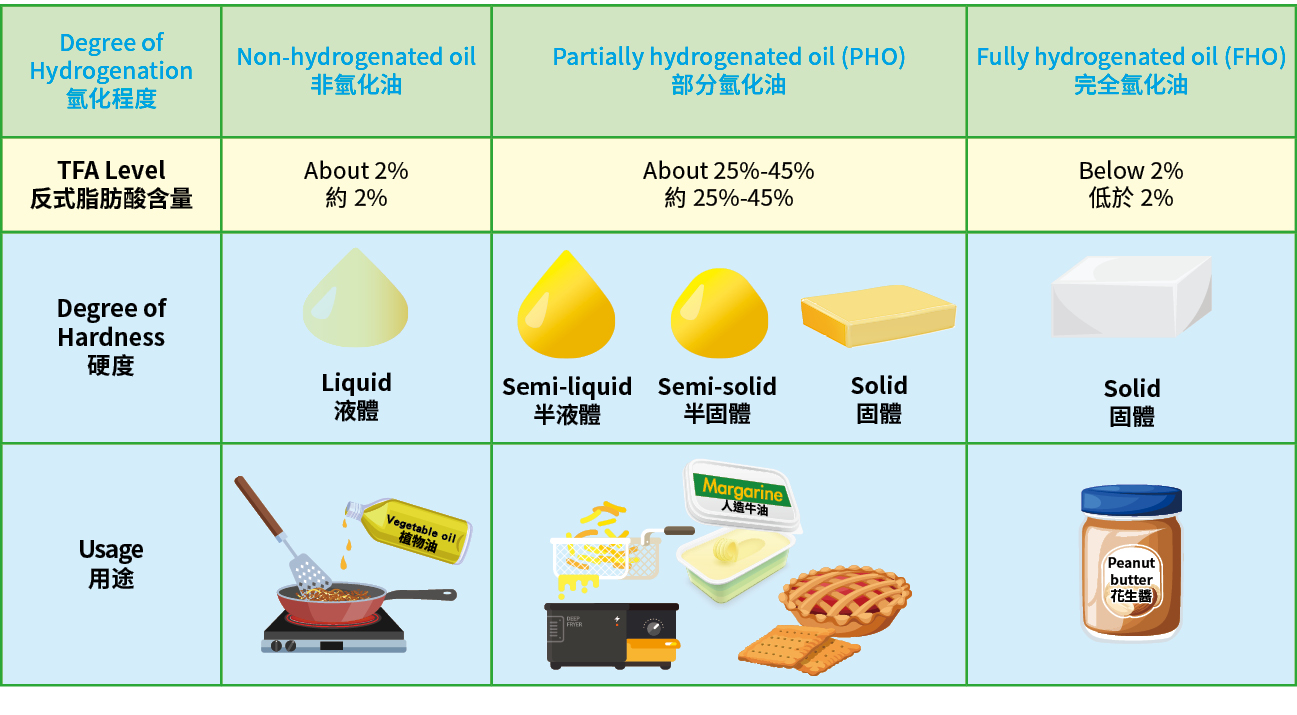 Figure 1: Modification of liquid oils at different degrees of hydrogenation (from partial to complete) produces fats of different hardness (from liquid to solid) for various applications. During hydrogenation, high levels of IP-TFAs may result in PHOs, typically at between 25% and 45%.

PHOs were first introduced into food supply in the early 20th century as an economical replacement for oils and fats with a high content of saturated fatty acids (SFAs) in animal (e.g. butter, lard, beef tallow) and vegetable (e.g. cocoa butter) fats. A vast range of PHO products has been developed through an industrial process of “hydrogenation” which modifies oils and fats tailored to suit the desired applications in food production.  By controlling the various elements in the process (such as the types of oil, hydrogen pressures, temperatures, catalysts, etc.), a liquid oil is turned into semi-solid or solid fat at room temperature through this hydrogenation process (Figure 1).

The versatile semi-solid to solid PHOs have been used in producing many foods.  For instance, they give different forms of margarine from soft to hard in texture, and of compact or airy baked goods such as biscuits and cakes.  PHOs also help create layers in puff pastries and pies. They give cookies and potato chips a crispy mouthfeel.  For deep-frying of doughnuts, solid PHOs can give glaze and prevent migration of liquid oil into coatings and/or packages.

The crux of banning PHOs is their high IP-TFA levels

The use of PHOs in food industries has become popular because of their low prices comparing with those of natural animal and vegetable fats and the longer life span of their products. PHOs were also once believed to be a healthier alternative for animal and vegetable fats high in SFAs, which would increase cholesterol levels and the incidence of cardiovascular disease.  And now, decades later, there are growing evidence from scientific research that consumption of IP-TFAs from PHOs is harmful to health and contributes significantly to increased risk of coronary heart disease.

IP-TFAs not only increase the low-density lipoprotein (LDL) “bad” cholesterol, but also decrease the high-density lipoprotein (HDL) “good” cholesterol. The WHO suggests that IP-TFAs are not part of a healthy diet and have to be avoided. To protect the heart health of consumers, countries like the USA, Canada and Singapore have banned the use of PHOs in foods, whereas the member states of the European Union have set IP-TFA limits in foods.

Reduce PHO intakes from our diets for our heart health

In limiting IP-TFAs in our diet, a concerted effort is needed from traders and consumers. PHOs are totally replaceable. In replacing PHOs, traders should consider using options of healthier oils and fats that contain as little SFAs and as much unsaturated fatty acids as possible when reformulating food products.  SFA should only be used in limited applications where there is no alternatives.  For margarine and vegetable shortening, source for PHO-free ones.

Consumers should maintain a balanced and varied diet comprising a wide variety of fruits and vegetables rather than high fat foods. When cooking, use oils and fats sparingly with reference to the food pyramid. Always choose the healthier ones whenever possible.  Last but not least, use the nutrition label to choose prepackaged food lower in SFAs and no TFAs.