Nutrition labels on prepackaged foods are a tool that helps us in achieving healthy eating. In the last article, we discussed how to read the labels and choose a healthier food for preventing diabetes and obesity. In this article, we talk about  the World Health Organization (WHO)'s dietary advice on preventing hypertension and coronary heart disease (CHD) as well as the use of nutrition labels on these conditions.

Sodium is one of the key factors affecting blood pressure. Excessive sodium intake increases the risk of developing high blood pressure. Also, eating too much food high in fat (especially saturated fat and trans fat), sodium, and sugar (see previous issue) increases the risk for CHD. To prevent hypertension and CHD (and its risk factor such as hyperlipideamia), we should follow a balance diet, maintain optimal body weight and waist circumference, and adopt a healthy lifestyle.

WHO's Dietary Advice on Preventing Hypertension and CHD

To prevent hypertension and CHD, the WHO advises that an adult should limit  diary sodium intake to less than 2000 mg which is slightly less than one teaspoon of stle. Moreover, the daily energy intake from saturated fat and trans fat should be less than 10% and 1%, respectively of total energy intake.  While individual intake amounts may be higher or lower depending on energy requirements, an adult with a 2000-kcal diet, for example, should get no more than 20g and 2.2g of saturated fat and trans fat, respectively. 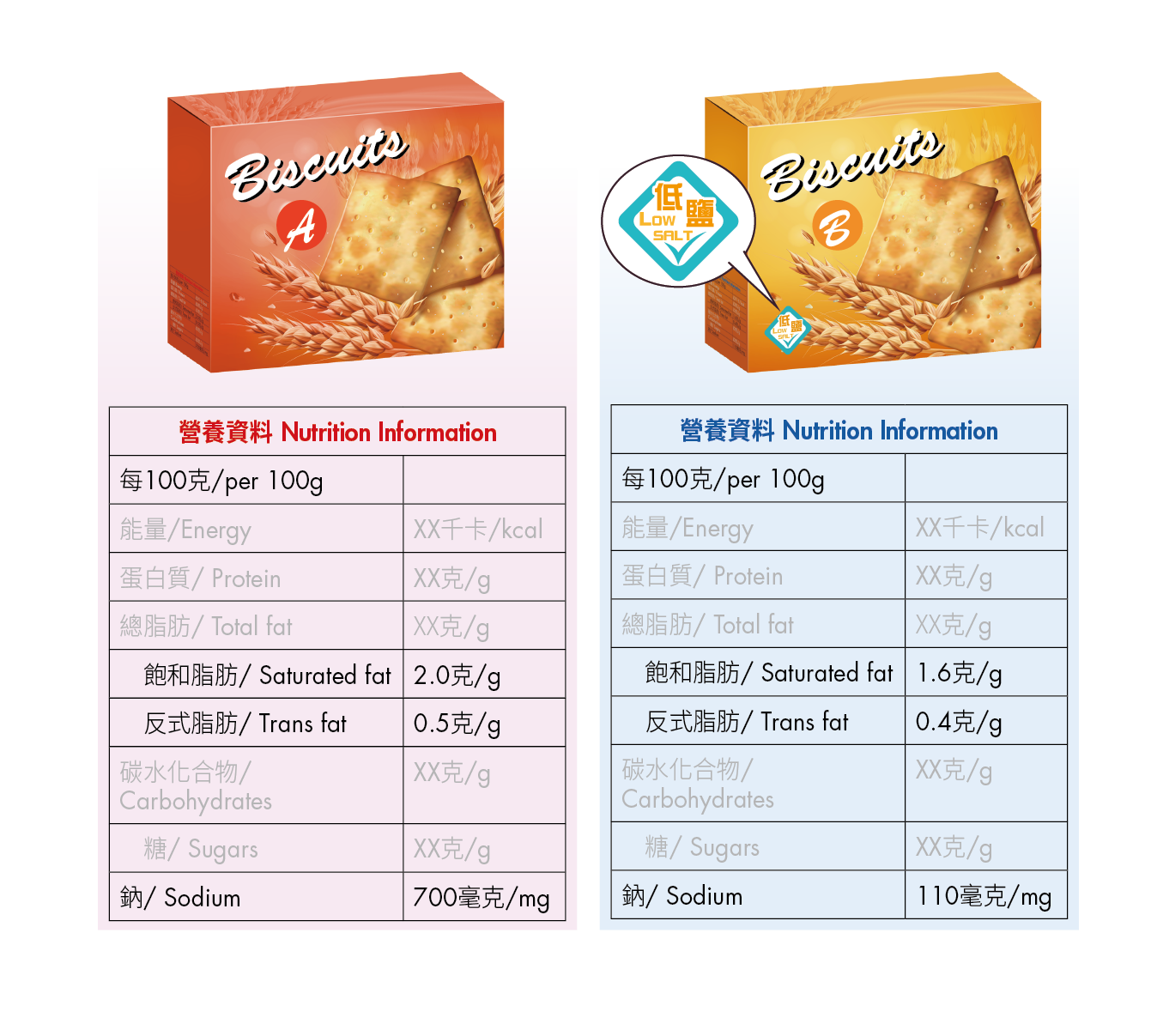 Use of Nutrition Labelling

Let's practise choosing foods with low or lower sodium, saturated fat and trans fat by using two packs of biscuits with hypothetical nutrient profile as an example according to the three tips below.

Some labels of prepackaged food contain claims such as “low salt”, “no salt”, “low saturated fat” or “trans fat free”. They are required to meet the legal claim conditions of “low” or “no” of the mentioned nutrients. To facilitate the public to select foods with less salt or sugar, some products may display the labels under the “Salt / Sugar” Label Scheme for Prepackaged Food Products. In this example, Biscuits B with the claim “Low Salt” is a better choice than Biscuits A.

You can compare the biscuits for nutrient content. Use the same reference amount (e.g. sodium content per 100g) when making comparison. It is better to choose one with lower sodium, saturated fat and trans fat more often. In this example, Biscuits B is a better option than Biscuits A because of lower sodium, saturated fat and trans fat. Remember conversion is required if they are of different reference amounts (e.g. one product in per 100g and another in per serving).

Tip 3: How Much Salt, Saturated Fat and Trans Fat Intake Contributed by the Product?