In June 2018, the Food Surveillance Programme of the Centre for Food Safety (CFS) detected excessive Bacillus cereus at a level of 4.6 million per gram in a packed pasteurised milk collected at a local supermarket. In September, in response to a food complaint, another packed pasteurised milk was found to contain Bacillus cereus at an excessive level of 3.8 million per gram. According to the Microbiological Guidelines for Food of CFS, if a ready-to-eat food contains Bacillus cereus at a level of more than 100 000 per gram, it is considered unsatisfactory. This article discusses Bacillus cereus in milk from the perspective of Hazard Analysis and Critical Control Point (HACCP) and the measures to control its growth during production and storage.

The flow diagram illustrates the production process of milk in general. After collecting raw milk from farm and transporting to a milk processing plant, raw milk will undergo heat treatment to destroy harmful and spoilage microorganisms. The heat-treated milk is then packaged aseptically and delivered to various retail outlets such as supermarkets for sale. 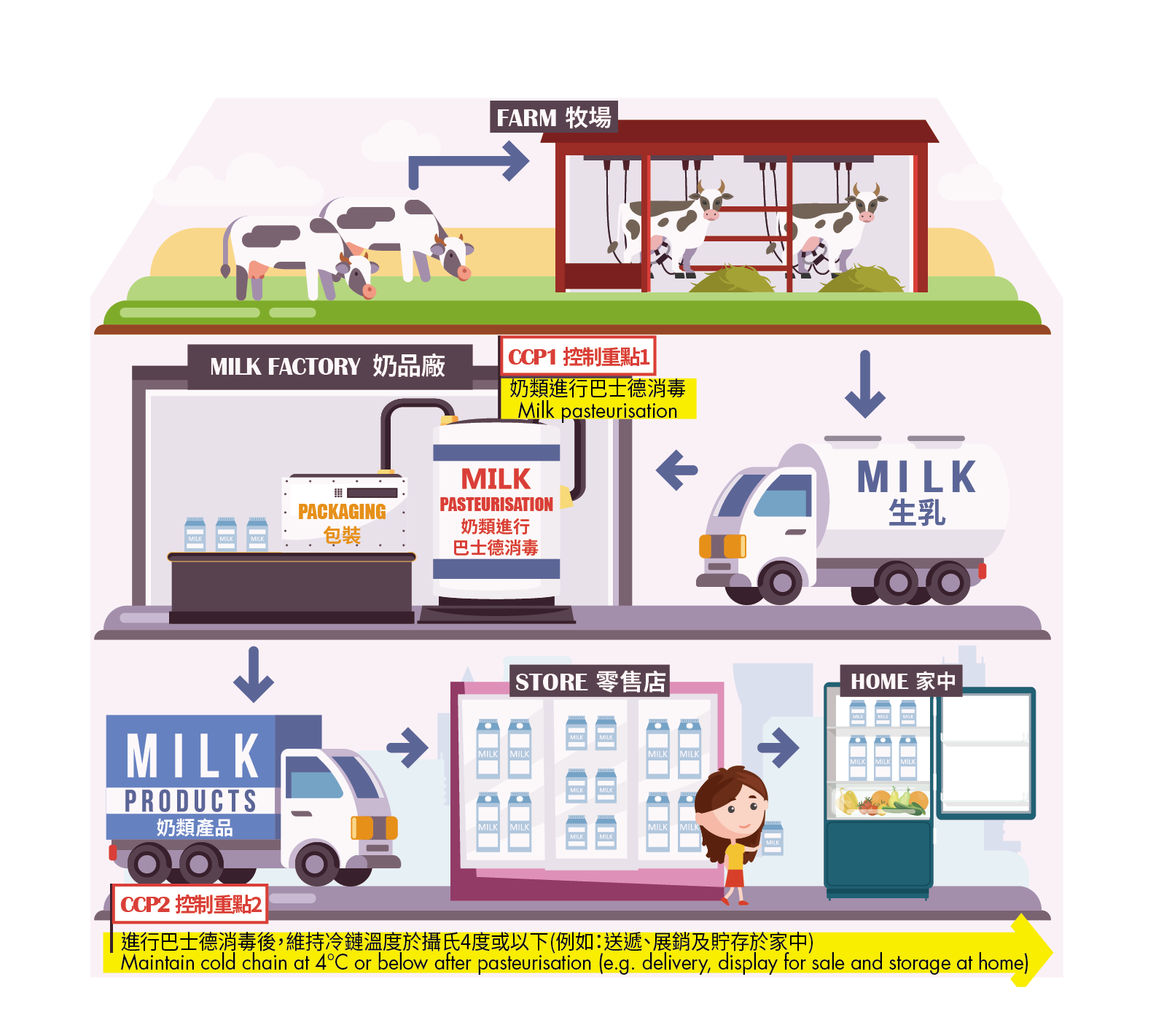 Occurrence of Bacillus cereus in milk has been reported worldwide. This bacterium has been detected on farms (e.g. soil), milking facilities as well as surfaces and equipment in milk processing plants. It can form heat-resistant spores and produce toxin which cannot be destroyed by heat. People consuming milk contaminated with excessive Bacillus cereus may suffer from food poisoning with symptoms such as vomiting and/or diarrhoea.

In a HACCP system, some steps of the food production are particularly important at which control measures are essential for eliminating or reducing the level of a food safety hazard. These steps are known as critical control point (CCP). In milk production, adequate heat treatment and low temperature storage are examples of CCP.

Pasteurisation is a commonly used heat treatment for preserving milk in the industry. Unlike sterilisation, it is usually performed at a temperature below 100°C (e.g. 72°C for 15 seconds) and the shelf-life of milk can be extended to several days under refrigerated storage. It aims at reducing harmful microorganisms in raw milk to an acceptable level while does not significantly affect the organoleptic properties (e.g. taste) of the milk. During pasteurisation, most bacteria in vegetative state are reduced to a very low level; however, heat-resistant spores produced by spores-forming bacteria such as Bacillus cereus and Clostridium spp. are able to survive.

After pasteurisation, another CCP will be the control of storage temperature. Bacillus cereus grows best at 30°C to 37°C but stops multiplying at below 4°C. If pasteurised milk is being left at room temperatures, spores of Bacillus cereus will germinate and grow quickly to levels that cause illnesses. Therefore, it is important to refrigerate the pasteurised milk at or below 4°C.

Inadequate pasteurisation and temperature abuse during storage will render the milk unsafe to consume. At the manufacturing level, pasteurisation temperature and time should be monitored closely to ensure harmful microorganisms are destroyed. Maintenance of low temperatures of the pasteurised milk along the food chain (e.g. transportation of packed milk to retail outlets, display for sale at stores and storage at consumers’ homes) is equally important. Manufacturers, retailers and consumers are advised to keep the pasteurised milk at or below 4°C so that the growth of Bacillus cereus and other microorganisms are limited.