This article provides an overview of the new arrangement of the Centre for Food Safety’s (CFS) import control on Japanese food.

New Arrangement for Import Control on Japanese Food
Ensuring food safety is the government’s prime consideration. In response to the 2011 Fukushima nuclear power plant incident (Fukushima incident), an Order was issued in March 2011 to restrict the import of certain food from Fukushima and other four prefectures (namely Chiba, Gunma, Ibaraki and Tochigi) in Japan to Hong Kong. The government has been reviewing the risk management measures on food products imported from Japan in the light of the latest situation. Taking into account the recent surveillance results and expert views from international organisations, new arrangement for import control on Japanese food was proposed as shown in Table below. 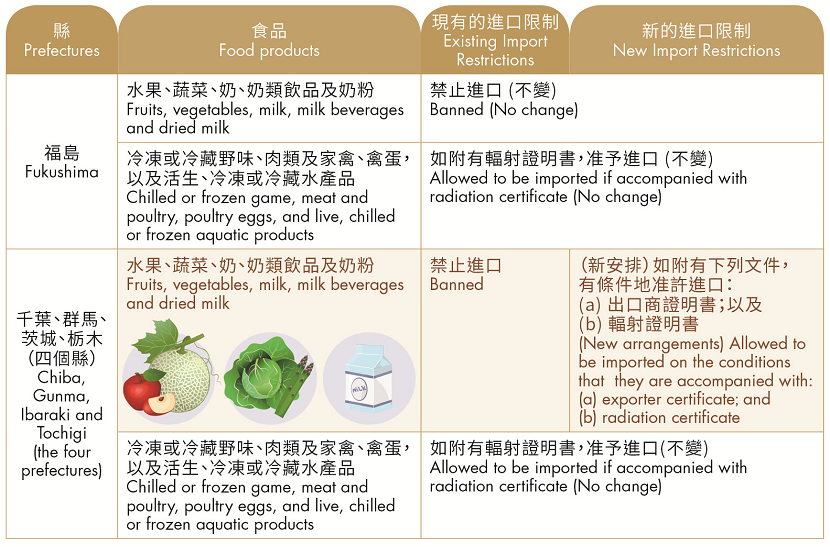 In summary, import restrictions on food from Fukushima remain unchanged. Vegetables, fruits, milk, milk beverages and dried milk from the four prefectures (Fukushima excluded) are allowed to be imported with the conditions that they are accompanied by both a radiation certificate and an exporter certificate issued by the Japanese authority. The radiation certificate shows which of the four prefectures each consignment of products come from and attests that the radiation levels do not exceed the Codex Guideline Levels (Codex levels). According to Codex, food is considered as safe for human consumption if the radiation levels do not exceed the Codex levels. As an additional safeguard, the exporter concerned must hold and produce exporter certificate which certifies the foods exported to Hong Kong by the exporter concerned are fit for human consumption as far as radiological protection is concerned and are readily available for sale in Japan implying that the radiation levels do not exceed the Japanese levels which are more stringent than Codex levels.

Two Levels of Gatekeeping to Safeguard Food Safety
Two levels of gatekeeping are involved under the new arrangement. At export level, the Japanese authority which issue the radiation certificates and exporter certificates must ensure that each consignment of those products do not come from Fukushima and attest that the radiation levels of the food products do not exceed the Codex levels as well as the more stringent Japanese levels. At the import level, the CFS will continue to conduct radiation tests on every consignment of food products imported from Japan. Food products can only enter the local market after radiation testing has been conducted. The CFS will strengthen inspection and testing on vegetables, fruits and milk products from the four prefectures. The radiation test results will continue to be updated on the CFS’s website every working day for public access.

Scientific Justifications for New Arrangement
The new arrangement for import control on Japanese food aforementioned being made has taken into account the following justifications.

The Japanese Government has enhanced its monitoring on radiation in food since the Fukushima incident. Food products detected with radiation level exceeding the Japanese standards (even though not exceeding the Codex levels) will be prohibited from domestic sale and export. Information from Japanese authority showed that as of early March 2018, over 2,000,000 samples were collected for radiation testing with small number of them (about 1200 samples) exceeded the Codex levels. Among those samples exceeded Codex levels, nearly 90% of them were collected in or before March 2013 and about 60% came from Fukushima.

International organisations including the World Health Organization, the Food and Agriculture Organization of the United Nations, and the International Atomic Energy Agency have been monitoring the impact of the fallout of the Fukushima incident on health and food safety and generally have confirmed the safety of Japanese food from the perspective of radiation levels.

The new arrangement will become effective after corresponding amendments to the Order has been made and gazetted. The CFS will keep monitoring the latest development and adjust its import control on Japanese food when necessary.