In April 2018, the Centre for Food Safety (CFS) received notification from the European Commission  (EC) that raw oysters harvested from an area in France were found to be contaminated with norovirus: the second time that a similar incident notificd notification in this year. Also in April, there were also recalls of eggs, raw milk cheese, and romaine lettuce due to the contamination with Salmonella or Shiga toxin-producing Escherichia coli (STEC). These incidents illustrate that raw or ndercooked food carries an inherent food safety risk.

Inherent Food Safety Risk of Raw Foods
Some people choose to eat raw or undercooked foods for the original taste but this comes at a price of having a higher risk of food poisoning. Contaminated raw foods has been one of the most frequently identified contributing factors of local food poisoning cases. 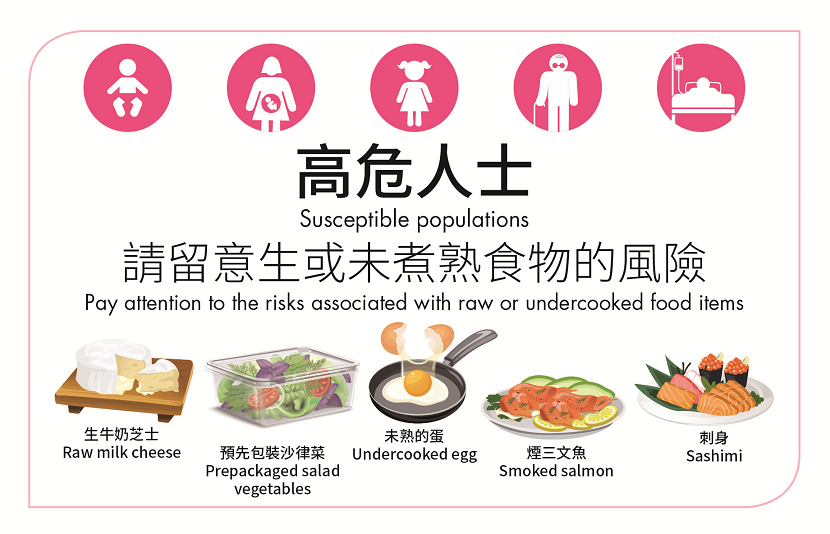 Susceptible populations are advised to avoid raw or undercooked foods.

While food can be contaminated with pathogens including “superbugs” (ie,. microorganisms that become resistant to antimicrobials) along different stages from farm to table, more concerns are put to their farming/growing environments for those foods commonly consumed in raw. Examples include oysters which are filter-feeders and can ingest norovirus and Salmonella in the contaminated water environment during feeding. Similarly in farms, vegetables could be contaminated with Salmonella and pathogenic E. coli when they are grown in the field by contaminated irrigation water or farmers who do not observe personal hygiene.

Food handlers may also be a source of contamination, if they do not observe good hygienic practices when handling foods, in particular when raw foods involving manual handling, such as sushi and sashimi.

To get rid of pathogens potentially present in raw foods, cooking food thoroughly is of paramount importance as heat can effectively kill the pathogens.

Susceptible Populations of Food Poisoning
Anyone can get food poisoning, but susceptible populations such as pregnant women, infants, young children, the elderly and people with weakened immunity (e.g. people with diabetes, liver or kidney disease, organ transplants and HIV infection; or people receiving chemotherapy or radiation therapy) are of higher risk of being infected or having complications if they consume raw or undercooked foods, due to their health status. Symptoms of food poisoning may range from mild to severe and vary depending on the pathogens. The most common symptoms include vomiting, diarrhoea, abdominal pain and fever, yet more severe or even life-threatening symptoms may occur in the susceptible populations. For example, hemolytic-uraemic syndrome (HUS) are more likely to occur for STEC infection in very young children and the elderly . For Listeria infection in pregnant women, symptoms may be relatively mild in mothers, but the passage of the bacterium through the placenta may cause miscarriage, stillbirth, or even infant death. Listeria infections in elderly and people with weakened immunity may lead to severe infections of the bloodstream or brain.

Key Points to Note:
1. Raw or undercooked food could be contaminated with pathogens at different stages from farm to table and hence have inherent food safety risk.
2. Consequences of food poisoning sometimes could be quite serious, particularly in susceptible populations.
3. Cooking food thoroughly before consumption is an effective way to get rid of foodborne pathogens and hence prevent food poisoning.