Reduction of Salt in Prepackaged Foods

Dietary salt/sodium intakes are closely related to health. Excessive sodium intake will increase the risk of developing hypertension, stroke and coronary heart disease. The World Health Organization (WHO) had developed a set of indicators and voluntary global targets for the prevention and control of non-communicable diseases and a target of 30% relative reduction in mean population intake of salt by 2025 had been set. The WHO opines that promoting product reformulation to contain less salt is essential in order to reduce population salt intake and should be one of the first actions considered, amongst others.

After taking food safety, quality and consumer acceptance into consideration, product reformulation is the widely adopted approach to reduce the salt intake in prepackaged and restaurant foods. Three initiatives have been identified to reduce the salt contents in foods to the lowest level possible over time: (i) to reduce or remove the amount of salt/sodium to the minimum little by little, (ii) to replace the sodium uses with alternatives, and (iii) to resize the package of products (see illustration). 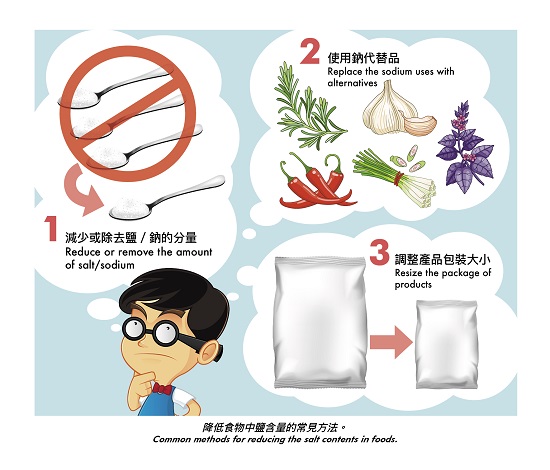 Manufacturers of prepackaged foods can gradually reduce the amount of salt used. They can also source and target ingredients with lower sodium contents. Such information could be obtained from their suppliers.

Replacing the sodium uses with alternatives could also reduce the sodium contents in prepackaged foods. Natural ingredients (e.g. lemon, tomato) or herbs and spices (e.g. chilli) could be used for flavouring.

Range of portion sizes of prepackaged foods can be offered for customers to choose. If smaller portion size is not possible, package can be improved for proper storage of the remaining food for other eating occasions (e.g. use of zipper bags or resealable boxes).

Product Reformulation is Feasible and Practical

The process of setting targets for sodium reduction in foods is complex since the role and function of salt vary depending on the nature of the food. Nevertheless, many countries (e.g. the United States, the United Kingdom (UK), and Canada) have established sodium reduction targets in various food categories for gradual reduction in sodium, which serve as a platform to promote product reformulation to the food industry.

Product reformulation had been found practical in overseas. In Ireland, there were substantial reductions of sodium content in sausages (11% reduction) and various breakfast cereals products (38%-63% reduction) from 2003 to 2015. In the UK, the sodium content of a ketchup product had been reduced by 39% from 2000 to 2012.

Trade members should be aware of the salt contents of their prepackaged foods on sale as they have public health implication. As a result, trade members should actively participate in reducing salt contents in foods. They could make greater efforts to reformulate food recipes to provide more quality foods with less salt to the public with reference to the Trade Guidelines for Reducing Sodium in Foods developed by the Centre for Food Safety and the sodium reduction targets established by overseas authorities.

In addition, the Committee on Reduction of Salt and Sugar in Food and the Government jointly introduced a voluntary “Salt / Sugar” Label Scheme for Prepackaged Food Products with the support of food trade in October 2017 to assist consumers to easily identify low-salt-and-sugar products. Trade members can display the “Salt / Sugar” Labels on their prepackaged food products which meet the claim conditions of “low salt”, “no salt”, “low sugar” and “no sugar” under the Food and Drugs (Composition and Labelling) Regulations (Cap.132W).