According to the World Health Organization (WHO), antimicrobial resistance (AMR) occurs when microorganisms change in ways that render the medications used to cure the infections they cause ineffective. It is a global public health concern because it can result in prolonged illness, disability and death, higher risks for medical procedures and increased cost of health care with longer stays and more intensive care required. Given its complexity and involvement in multiple sectors, AMR should be addressed by a comprehensive framework. This issue has been taken up by the General Assembly of the United Nations where countries reaffirmed their commitment to develop action plans on AMR based on the Global Action Plan on AMR developed by the WHO. Locally, the Government of HKSAR launched the “Hong Kong Strategy and Action Plan on Antimicrobial Resistance 2017- 2022” this year. This article introduces some basics regarding AMR from the food safety perspectives.

How Does AMR Emerge?

AMR occurs naturally over time, usually by means of genetic changes. However, this process can be accelerated by misuse and overuse of antimicrobials in humans and animals. Examples of misuse of antimicrobials include people taking antibiotics when they have viral infection and antibiotics given to food producing animals for growth promotion, without professional oversight.

Although there are many possible routes of acquisition of AMR bacteria ( e.g. within and among humans and animals, and through food, water and the environment), we focus only on the food routes in this article. 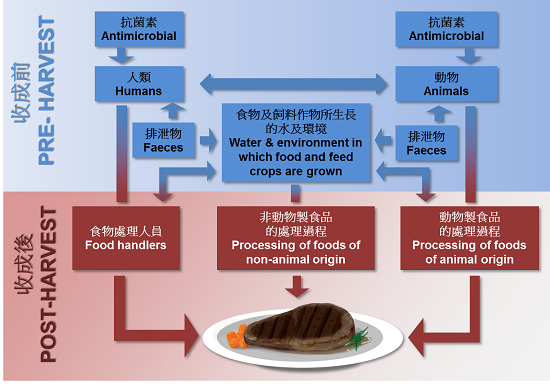 Foods can act as a potential vehicle for transmission of AMR bacteria. Foods of animal origin can become contaminated during slaughter and carcass dressing while foods of plant origin can be contaminated by affected environment, water and manures (see Figure).

In addition, foods can also become contaminated at different points of post-harvest stage. They can be contaminated with AMR bacteria by infected food handlers particularly if the food handlers do not observe good hygienic practices when handling foods; or through improper food processing or unhygienic food preparation environment.

Nevertheless, as indicated by overseas authorities, further research is needed to determine the extent of exposure of AMR bacteria via the food chain. On the other hand, it is believed that any further increase in the occurrence and spread of AMR bacteria in foods is likely to have an influence on human exposure.

What Kind of Food is of Higher Risks?

The foods we eat come from animals and plants. The WHO considers that foods of animal origin represent the major route of human exposure to foodborne pathogens with AMR. In general, raw or undercooked foods are more likely to carry bacteria, including AMR bacteria, derived from the primary production than thoroughly cooked foods.

The “One Health” approach provides the framework for multi-sectoral collaboration to combat and contain AMR. To reduce the emergence of AMR bacteria in the food chain, measures are be taken at the upstream of the chain. Antimicrobial agents should be used judiciously and in accordance with professional advice in animal husbandry and human medicine.

With regard to the already existence of AMR bacteria in foods, it is important to prevent humans from infected with these bacteria. The WHO states that inappropriate food-handling encourages the spread of AMR and education in safe food handling is a key measure for prevention of foodborne diseases, including containing AMR. To assist Member States in promoting safe food handling behaviours and educate all food handlers and consumers, with tools easy to adopt and adapt, the WHO built the Five Keys to Safer Food Programme. The 5-keys adopted in Hong Kong are “choose safe raw materials”, “keep hands and utensils clean”, “separate raw and cooked food”, “cook thoroughly”, and “keep food at safe temperature” that everyone should observe to prevent foodborne diseases, including foodborne infections due to AMR bacteria.