Dioxins and DL-PCBs are environmental pollutants with similar toxic effects. Dioxins are ubiquitous in the environment, occuring natually (e.g from volcanic eruptions and forest fires), as by-products of combustion and various industrial processes. DL-PCBs, on the other hand, were more related to industrial activities. Dioxins, once released, contaminate soil surfaces and aquatic sediments in streams, rivers and lakes where hairy crabs live. Hairy crabs scavenge for food at the bottom of these habits. Dioxins and DL-PCBs bioaccumulate along the food chain. The long-term cumulative risk of dioxins to health includes developmental problems in children and reproductive problems in adults as well as cancer-causing in humans. 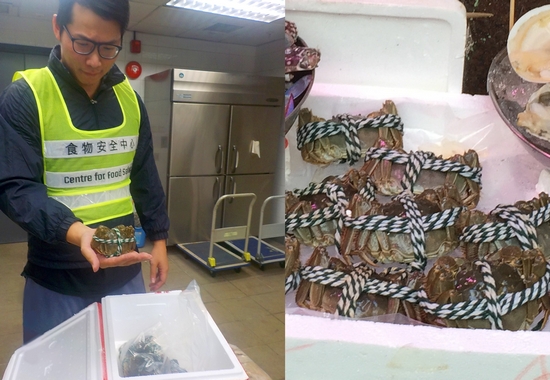 Hairy crabs are inspected and tested for chemicals at import, wholesale and retail levels.

The Public Health and Municipal Services Ordinance (Cap. 132) stipulates that all foods for sale and are intended for human consumption should be fit for human consumption. Hairy crabs imported should comply with the local requirements including veterinary drug residues (such as nitrofurans and malachite green), metallic contaminants (such as cadmium and mercury), synthetic hormones, colouring matters (such as Sudan dyes), pesticide residues, and dioxins and DL-PCBs.

In Hong Kong, dioxins and DL-PCBs in foods have been closely monitored by the Food and Environmental Hygiene Department. After considering international practices and local dietary habits, the CFS established an action level of 6.5 picograms (pg) toxic equivalent per gram in edible part of hairy crabs in 2016.

Hairy crabs sold in Hong Kong came mainly from the Mainland, from registered aquaculture farms that have undergone quality inspection by the relevant Mainland authorities. Hairy crabs were also imported from other places, such as the Netherlands, Taiwan and Japan especially in recent years. Health certificates, if any, issued by the issuing authorities of the exporting countries/regions accompanying the consignments would be subjected to inspection by the CFS.

As part of its Food Surveillance Programme, the CFS conducts surveillance on hairy crabs during hairy crab season. The CFS will follow up on the unsatisfactory results, including conducting risk assessment, tracing the source and distribution. Based on the risk assessment result of the unsatisfactory hairy crab sample, its importation from the concerned aquaculture farm might be suspended. The CFS would instruct the local importer concerned to remove the affected products from shelves, stop sale or initiate a recall of the affected products. The CFS would issue press release and trade alert immediately to inform the public and the trade as well as inform the relevant authority of the exporting country/place for follow-up actions at source.

As of noon of 16 October 2017, 84 hairy crab samples, including 11 samples tested for dioxins and dioxin-like PCBs, have had satisfactory test results. One unsatisfactory sample imported from the aquaculture farm in Taoyuan, Taiwan, collected at the import level, was found to contain dioxins and dioxin-like PCBs at a level of 9.86 pg toxic equivalent per gram of the food sample, exceeding the action level adopted by the CFS.