In this issue, we discuss the review results on the recommendations on washing of vegetables at home.

As mentioned in the last issue, major progress has been made in reducing pesticide residue levels in vegetables and fruits. However, when acute poisoning caused by pesticide (predominantly methamidophos) tainted vegetables was a common place about 20 plus years ago, consumers were concerned whether the risk reduction measures they adopted would be sufficient to reduce pesticide residues to harmless levels. A study to examine the effects of washing, soaking, blanching and stir-frying of vegetables was conducted by the government at that time. The results revealed that washing vegetables well in clean running water for several times, then soak them in water for an hour or blanch them in boiling water for one minute and discard the water could effectively reduce pesticide residues. Both measures could be adopted together for further reduction in residue levels. Furthermore, outer leaves may be removed if concerned individuals would like further reduction in pesticide intake. These advices had been given since the early 1990s.

Review of the Advice in Cleaning Vegetables

The era of blatant methamidophos abuse is probably gone. There are no cases of pesticide food poisoning reported in the past 11 years and the unsatisfactory rate for pesticide residues in vegetables and fruits between 1 August 2014 and 2016 is a low 0.2%, and the levels of pesticide residues detected were so low that they were not likely to cause poisoning. With pesticide residue problem under control, a question emerged and doubted whether the previous advice is excessive in the present days, which results in unnecessary nutrient loss. The Food and Agriculture Organization of the United Nations remarked that soaking of fruits and vegetables "is never a good idea" due to the loss of water soluble nutrients. The Centre for Food Safety (CFS) thus examined the issue again and updated her advice.

An extensive review of recommendations on cleaning of vegetables and fruits at home by international and major overseas authorities including the Codex Alimentarius was carried out. Even though the effect of the same cleaning regime may vary among various vegetable-pesticide residue combinations, many authorities recommend washing of vegetables under clean running water. A range (minimal to up to 90%) of reduction in residue levels had been reported in various studies, with different combinations of pesticides, crop and washing methods. They also recommended peeling and scrubbing of hard produce to reduce bacterial and pesticide load and trimming of damaged parts (see Picture). Some authorities have specifically not recommended the use of soaps, special detergents or commercial produce washes for home use due to the concern of introducing a new source of chemical residues. Studies on the effect of washing on various pesticide residues have also been reviewed. It is noticed that while soaking for 5 to 20 minutes can reduce some pesticide residues, the effect of further soaking would be relatively small. 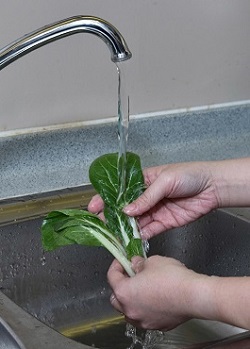 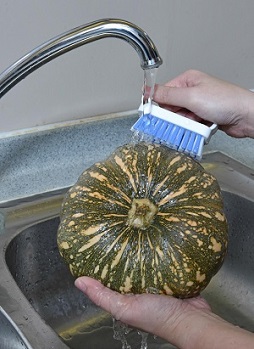 Other than soaking, the CFS has also been recommending blanching and removal of outer leaves when preparing vegetables for the purpose of reducing pesticide residues levels. With the present level of pesticide residues in vegetables, blanching, soaking and removal of outer leaves are no longer considered necessary for this purpose, even though it is generally understood that food processing steps like cooking can contribute to the reduction. This is in line with the recommendations of many food safety authorities.

With discussion of the information gathered and consideration of the present local situations, advices are now updated after consulting the Expert Committee on Food Safety: