Review of Food Incidents in 2016

Food is indispensable to lives, but unsafe food poses global health threats and endangers all walks of life. As the food authority in Hong Kong, the Centre for Food Safety (CFS) has been actively monitoring local and overseas food incidents through various channels. Upon identifying food incidents that may affect local public health, appropriate control measures will be initiated.

In 2016, the CFS identified about 1 400 food incidents and another 450 food recalls related to undeclared allergens, which are similar to the figures in 2015. The CFS conducted risk assessments on all food incidents identified and took follow up actions for those with local public health relevance. 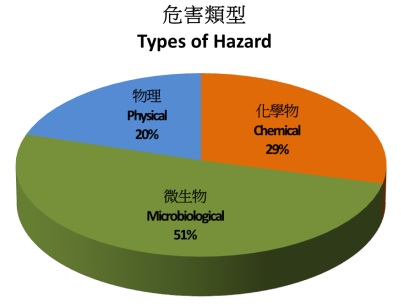 Types of hazard involved in local alerts due to food incident

Three important food incidents which attracted considerable interest from the public and the media in 2016 are described in the following paragraphs.

In managing food incidents, the CFS not only strives to reduce the immediate impact of the incidents, but also takes important follow-up measures (e.g. enhancing surveillance) to prevent similar problems from occurring in the future. The CFS is committed to maintaining a comprehensive system to detect, manage and review food incidents in a timely manner.