The Authenticity of Alleged "Fake" Rice

Last month, the Centre for Food Safety (CFS) received complaints about suspected "fake" rice used by two local restaurants. Some video clips on social media showed that the "fake" rice could be elongated upon rolling. In response, the Customs and Excise Department and the CFS collected remnants of the incriminated "fake" rice and additional rice samples from the restaurants for testing. Results showed that all samples were rice and passed chemical analyses.

In recent years, reports in the media have alleged that plastic rice, probably coming from China, was exported to some Southeast Asian and African countries. However, none of the national authorities from these places substantiated these allegations. On the other hand, the Ministry of Commerce of Mainland China remarked earlier that the alleged "fake" rice had no relationship with Chinese rice exporters.

Rice is a Staple Food in Hong Kong

Rice is a main source of energy in our diet. According to the First Hong Kong Population-based Food Consumption Survey, on average, about 300 grams of cooked rice were eaten by a Hong Kong adult each day which accounted for over 60% of all cereal foods consumed. The Trade and Industry Department's data showed that about 90% of imported rice in 2016 was Fragrant rice from Thailand and Vietnam.

Why Some Cooked Rice Can Be "Rolled Without Cracking" But Some Can't?

Rice contains 90% starch. Rice starch consists of two forms, linear molecule (amylose) and branched molecule (amylopectin). The cooking and eating quality of rice is greatly affected by the amylose-to-amylopectin ratio and their fine structures. Generally speaking, long-grain rice has higher amylose content and gives firm and fluffy texture with rice grains separate after cooking while short-grain rice has low amylose content and is soft and sticky with rice grains cling together after cooking. However, this relationship is becoming blurred especially in Asian rice varieties due to the continuous improvement of rice quality from producers. (See Figures 1 and 2). 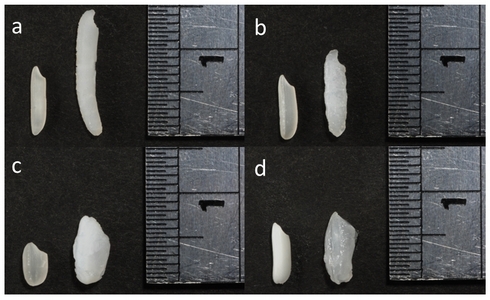 Figure 2: Raw (left) and cooked (right) rice of a. Basmati, b. Jasmine, c, Pearl, d. Glutinous. The number on the ruler represents one centimetre(cm).

Despite the diversity in varieties and textures, most cooked rice can be rolled and elongated because they all have certain degree of flexibility and elasticity. Glutinous rice has the highest elasticity (think about the texture of Mochi and Chinese New Year pudding) while rice with high amylose content has lower elasticity.

Rice that have been refrigerated or kept overnight after cooking may crack more readily upon rolling. It is because when cooked rice is cooled for a period of time, the starch inside the grain undergoes a process called "retrogradation" when amylose and linear parts of amylopectin molecules rearrange themselves to form a firmer and less flexible structure that makes the rice brittle.

Testing the Authenticity of Rice

The Government Laboratory tested remnants of the incriminated rice and additional samples of cooked and raw rice. All samples were confirmed to be rice—rice specific marker was identified in DNA test. Other food safety parameters, such as plasticisers, aflatoxins and metallic contaminants, were also tested. All the samples have passed the tests.

The CFS has all along been taking rice samples at import, wholesale and retail levels for testing as part of food surveillance. In 2016, the CFS took more than 650 rice samples for testing of food safety parameter including pesticide residues, colouring matters and metallic contaminants. Except for one black rice sample from Thailand detected with cadmium level exceeded legal limit, the test results of other samples were all satisfactory.