Raw Oysters, Stay or Out?

Despite the Centre for Food Safety (CFS)'s ongoing publicity regarding eating raw oysters carries inherent risk, every now and then food poisoning outbreaks linked to raw oysters are reported in Hong Kong. Recently, there are discussions on simply banning the sale of raw oysters. Should we do this?

Oysters feed by filtering the surrounding waters and may concentrate harmful microorganisms, including viruses (e.g. norovirus and Hepatitis A virus) and bacteria (e.g. Vibrio parahaemolyticus and Vibrio vulnificus) in their tissues. During 2013-2015, there were 18 confirmed norovirus food poisoning cases and two confirmed Vibrio parahaemolyticus food poisoning cases, affecting a total of 140 people, related to the consumption of raw oysters reported to the Centre for Health Protection of the Department of Health. Whilst illnesses caused by the consumption of contaminated raw oysters are usually mild and self-limiting, they can also be deadly, especially for the susceptible populations (e.g. elderly, young children, pregnant women and people with weakened immune systems or liver diseases). 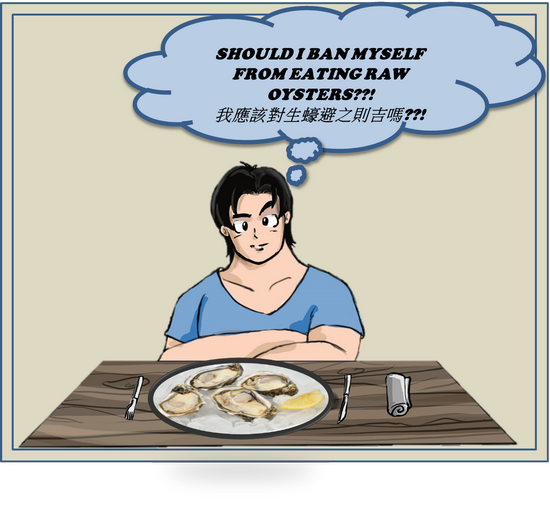 Should I ban myself from eating raw oysters??!

To control the hazards associated with raw oysters, national authorities are taking various control measures to protect public health. Knowing the main hazard for the production of oysters is microbiological contamination of waters in which they grow, one of the most widely used management options is the regular microbiological monitoring of oyster harvesting areas or oyster tissues and classifying the areas. For instance, in the EU, oyster production areas are classified into three classes according to the level of faecal contamination. Only oysters harvested from Class A areas (with least faecal contamination) can be used for direct human consumption, whereas oysters collected from areas of other classes are to be used only after depuration, relaying or heat processing. Other management options include ensuring appropriate temperature control to prevent out-growth of bacteria after harvesting.

In Hong Kong, importers are encouraged to obtain health certificates issued by relevant authority of the exporting countries to accompany their imports, certifying that the raw oysters concerned are fit for human consumption. Food businesses should also obtain a restricted food permit before selling oysters to be eaten in raw state. Like other jurisdictions, the CFS has made reference to Codex to set microbiological limits for oysters intended for direct consumption.

Even though effective measures are in place, there is no guarantee that raw oysters are completely free from microbiological risks, e.g. raw oysters harvested from areas monitored for faecal contamination may still contain norovirus. It is not always possible to detect problems before food poisoning cases due to limitations of the current knowledge and technology including laboratory testing. From June 2013 to May 2016, the CFS put up 10 import and sale bans (more stringent measures) towards raw oysters harvested from various harvesting sites due to possible link to local food poisoning cases/ outbreaks or tested positive for norovirus by overseas authorities.

Why Not Simply Ban All Raw Oysters?

Superficially, banning the import and sale of oysters intended for raw consumption can solve the problems for good. It is, however, a drastic (also not proportionate to the risk posed to public health) measure to avoid such risk. And oyster lovers may eventually have greater temptation to consume oysters not destined for direct consumption raw, i.e. even riskier! In addition, banning all imported raw oysters without sufficient scientific substantiation would result in unnecessary barriers to international trade, which would be subject to the World Trade Organization challenge.

In fact, there is no such thing as "zero risk" for food. Take leafy vegetables which play an important role in a healthy diet as an example, they accounted for more foodborne illnesses (~2.2 million per year; 22%) than any other commodities including molluscs (~0.28 million per year; 3%) in the US in 1998-2008. Consumers should make informed food choice based on their capacity for risk.

With proper risk management and communication by the government as well as efforts made by the trade, the general public can choose and enjoy a wide range of food in our gourmet paradise while susceptible populations should always avoid eating high risk food including raw oysters.