In March 2016, a consumer group reported the levels of pesticide residues and metallic contaminants present in some locally available vegetables. While no samples were detected with excessive metallic contaminants, two vegetable samples (one sweet potato and one bean) were found to contain pesticide residues at levels exceeding the Hong Kong limits. The issue has sparked discussions in social media on whether sweet potato is safe to eat. 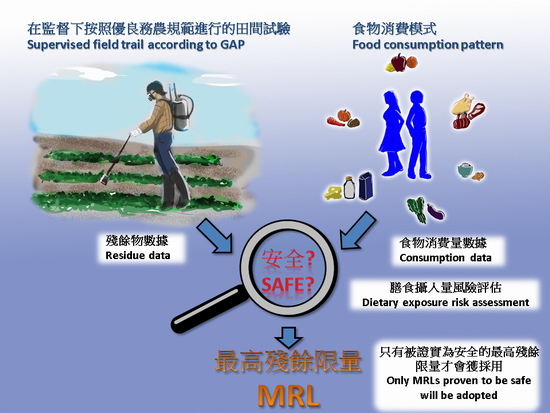 Dietary exposure risk assessment will be conducted to ensure that any pesticide residues remaining in the crop will not be harmful to consumers before an MRL is adopted.

Are Pesticides Safe to Use?

Pesticides are substances or mixtures of substances intended for preventing, destroying, repelling or mitigating pests. They are commonly used in agriculture to enhance and stabilise crop yield, protect the nutritional integrity of food, facilitate storage to assure year-round supplies, and provide attractive and appealing food products.

By their nature, pesticides are potentially toxic to organisms including humans. Pesticide residue levels tend to decline as the pesticide breaks down over time. Nevertheless, small amounts of pesticides may still remain in or on food even when pesticides are applied in the right amount and at the right time. When farmers use a pesticide according to label instructions and Good Agricutlural Practice (GAP), the residues in crop at harvest do not normally exceed the maximum residue limits (MRLs) established in the place of use and are very unlikely to pose a health risk.

MRLs are the maximum levels of a pesticide residue that are legally permitted in or on food when pesticides are applied correctly. MRLs for individual pesticide-food pair are established on the basis of appropriate data, obtained mainly from supervised field trials designed to estimate the level of pesticide residues likely to occur in a commodity or crop when a pesticide is used according to GAP. Dietary exposure risk assessment is conducted with the established residue levels and consumption pattern to ensure the amount of residues consumed will not be a concern to human health before an MRL is adopted (Figure). Since MRLs are set at levels well below the amount that could pose a health concern, a residue level above the limit may indicate non-compliance of GAP but does not necessarily imply immediate risk to consumers' health.

How are Pesticide Residues in Food being Regulated?

In Hong Kong, the Pesticide Residues in Food Regulation (the Regulation) specifies a list of MRLs/extraneous maximum residue limits (EMRLs) for certain pesticide-food pairs. The presence of any of these pesticide residues in food at levels exceeding the MRLs/EMRLs is not permitted.

If a food contains pesticide residues for which no MRLs/EMRLs have been specified in the Regulation, except for exempted pesticides, the import or sale of the concerned food is only allowed if consumption of the food is not dangerous or prejudicial to health. To decide if consumption of the food concerned is harmful, risk assessment will be conducted to evaluate both the acute and chronic effects on human health.

Since the enactment of the Regulation till 15 April 2016, 141 vegetable and fruit samples out of 58 500 food samples collected by the Centre for Food Safety (CFS) were detected with excessive pesticide residues. The overall unsatisfactory rate of less than 0.3% compares favourably with places such as Canada, the European Union, New Zealand, and the United States. In addition, previous CFS's Total Diet Studies showed that dietary exposures to the residues of 85 commonly encountered pesticides and some organochlorine pesticides would be unlikely to pose unacceptable health risks to consumers.

In response to the detection of two unsatisfactory samples, the CFS had taken follow-up samples for testing and all pesticide residues results were satisfactory. In the past three years, three out of about 600 tested sweet potato samples contained excessive pesticide residues.