On 12 August 2015, massive explosions devastated a warehouse holding containers of dangerous chemicals in Tianjin. The public are worried that these chemicals, especially cyanides, might pollute the air, the water and the food in the area. This article discusses the occurrence, safety and regulations of cyanides in foods.

Cyanides and Their Occurrence in Foods

Cyanides seldom persist in surface waters and soils because at pH < 9.2, most cyanides in solution will evaporate as gaseous hydrogen cyanide and some will be transformed into less harmful chemicals (e.g. carbon dioxide and ammonia) by microorganisms, or will form complexes with metals. Cyanides are toxic to plants; however, not much is known about the uptake of cyanides into plants. Being a weak acid, hydrogen cyanide, when deposited a lot on wet surfaces of vegetables and fruits, may cause burning, wilting or discolouration, making these products unmarketable. 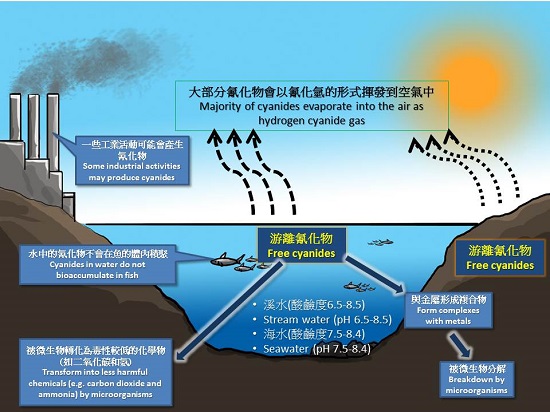 A simplified diagram showing the environmental fate of cyanides .

Cyanide-containing substances occur naturally in over 2 000 plant species; some of these are food plants such as bamboo shoots, cassavas and seeds or stones of apples, apricots, pears, plums, prunes, cherries, peaches, etc. In these plants, cyanides are bound to sugar molecules in the form of cyanogenic glycosides. Cyanogenic glycosides per se are relatively non-toxic; however, they are converted into toxic hydrogen cyanide in the intestinal tract. Young children are more susceptible and chewing only a few seeds of these plants may cause cyanide poisoning. Cooking cyanogenic plants thoroughly in boiling water can effectively reduce their toxicity levels.

Despite being illegal in most countries, cyanide fishing, whereby divers squirt cyanide into reef crevices to stun fish without killing them, is reportedly practised in some regions. The captured fish is mainly for the marine aquarium trade and sometimes for human consumption. Although there is no evidence of poisoning of people who eat cyanide-caught fish, the use of cyanide to catch fish kills other organisms in the ecosystem, leading to massive coral reef destruction.

Cyanides are toxic to living organisms at very low concentrations and fish is the most cyanide-sensitive group of aquatic organisms reported in the literature. Nonetheless, cyanides in water do not bioaccumulate in living organisms including fish, probably owing to their rapid transformation. The most frequent cause of cyanide poisoning in livestock is through ingestion of plants containing cyanogenic glycosides. However, according to the European Food Safety Authority, provided the animal is not intoxicated with hydrogen cyanide, the levels in meat, eggs or milk intended for human consumption can be expected to be very low in all food producing animals.

Cyanides are toxic to humans and animals due to their ability to inhibit cell respiration. Acute toxicity in human is characterised by symptoms such as vomiting, nausea, headache, dizziness, difficulty in vision, slow heart rate, convulsion, respiratory failure and may finally result in death. Symptoms of short term effects usually occur within minutes after breathing cyanides or eating foods that contain them.

Codex Alimentarius Commission has established maximum levels of 10 mg/kg and 2 mg/kg (as hydrocyanic acid) for cassava flour and gari respectively. In EU, the maximum permitted levels of hydrocyanic acid are 50 mg/kg in nougat and marzipan, 35 mg/kg in alcoholic beverages and 5 mg/kg in canned stone fruits. There is no specific regulation on cyanide in foods stipulated in the laws of Hong Kong; nevertheless, all foods for sale in Hong Kong must be fit for human consumption.

Regarding the explosions in Tianjin, the Centre for Food Safety (CFS) has been maintaining close contact with the relevant Mainland authorities; no vegetables, fruits or live edible aquatic animals from registered farms in Tianjin have been exported to Hong Kong since early this year. CFS' information also shows that no cattle have been imported from Tianjin since the explosion incident. To allay public concerns, the CFS also took 20 samples (e.g. vegetables and fruits) originating from areas around Tianjin for testing and cyanide was not detected in any of these samples.